You may have noticed the last few posts were somewhat belated, largely because I knew that writing them would mean the real end of our adventure. After our amazing bike trip, Michael and I flew from Podgorica all the way to San Francisco (via Istanbul and Frankfurt) for a wedding. It was the best possible reentry, with a weekend packed full of seeing friends we hadn’t seen in months.

After three wonderful days in San Francisco, we flew north to Seattle, our new home, and began to settle into our new lives: unpacking our house, finding jobs, and – best of all – spending time with family and friends. In our first few weeks here, we’re already loving the opportunities to spend time with close family, and we hosted our first few guests, both overnight and for board games and dinners!

We are sad to end our global adventures, of course, but we are incredibly grateful to be returning to the warmth of extended family in Seattle and to begin the new adventures to come!

As our final adventure before returning to real life back in the US, Michael and I spent six days biking around coastal Montenegro with my parents. After a week of all feeling unwell, we were a bit trepidatious to set out on bicycles, but also excited to be feeling like ourselves again. Michael had planned out the whole route and booked apartments along the way; the days were relatively short (20-30 miles) but mountainous, with several days having over 3,000 feet of climbing.

What a fabulous trip it was! The back roads were nicely paved, with very little traffic, and the countryside was absolutely beautiful, especially as the foliage was just starting to change color for fall. (It actually reminded Michael and me a bit of our hikes in Seoraksan last October!) 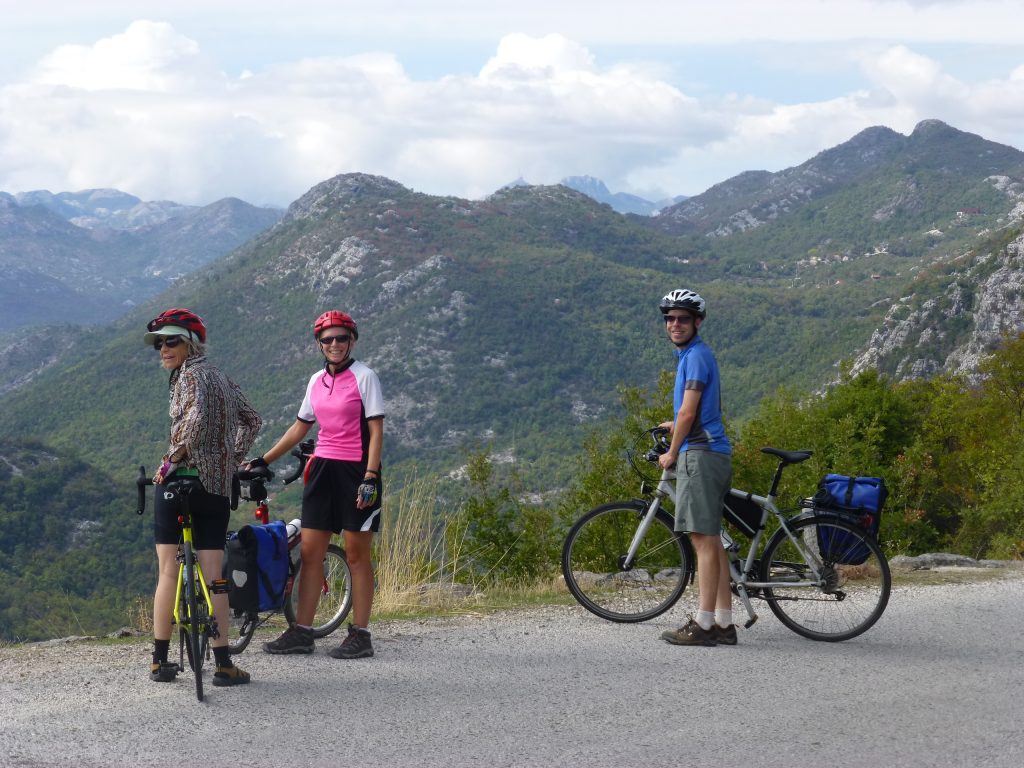 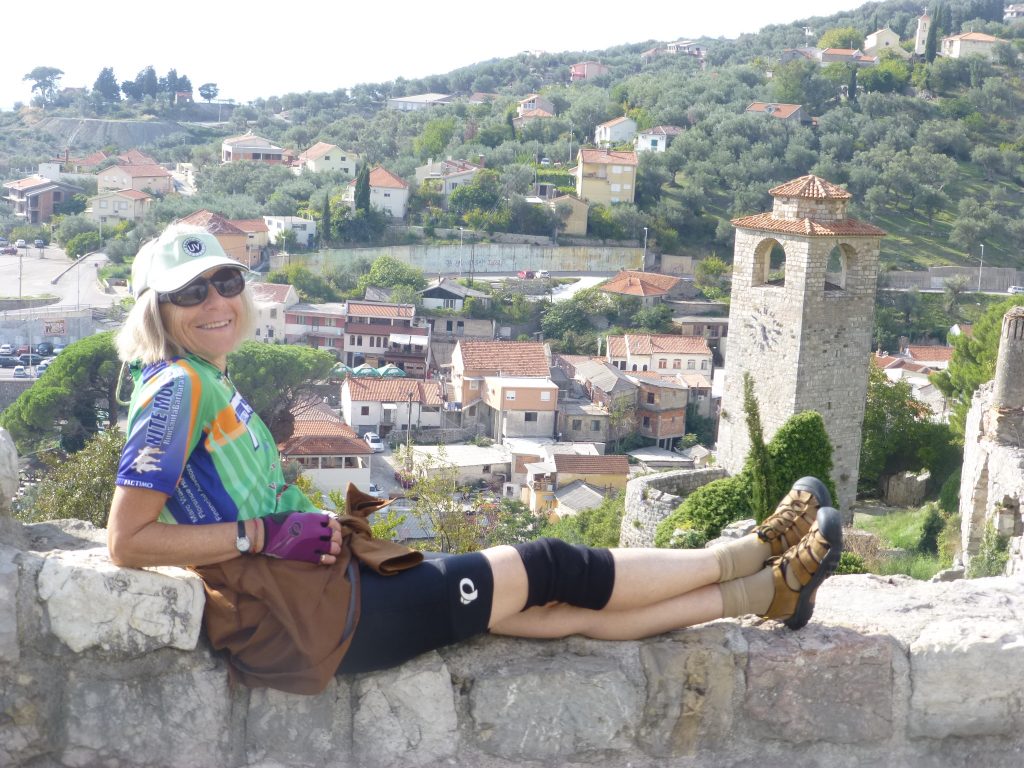 We climbed up to Cetinje, the former capital of Montenegro, full of embassies from the late 19th century when Montenegro was first created as an independent nation. We coasted downhill to the shores of Lake Skadar, where a series of tiny monasteries dotted the offshore islands and the only road wove through olive trees and fig trees and vineyards along the shore.

We climbed over the coastal mountains to the ancient cities of Bar and Ulcinj, where old fortress cities kept watch over stunning beaches, olive groves, and delicious seafood. And then we climbed our way back up over the mountains on a quiet road over the hills, through a kilometer-long old train tunnel open only to bicyclists, and downhill to a tiny train station where we hopped on a train back to Podgorica. 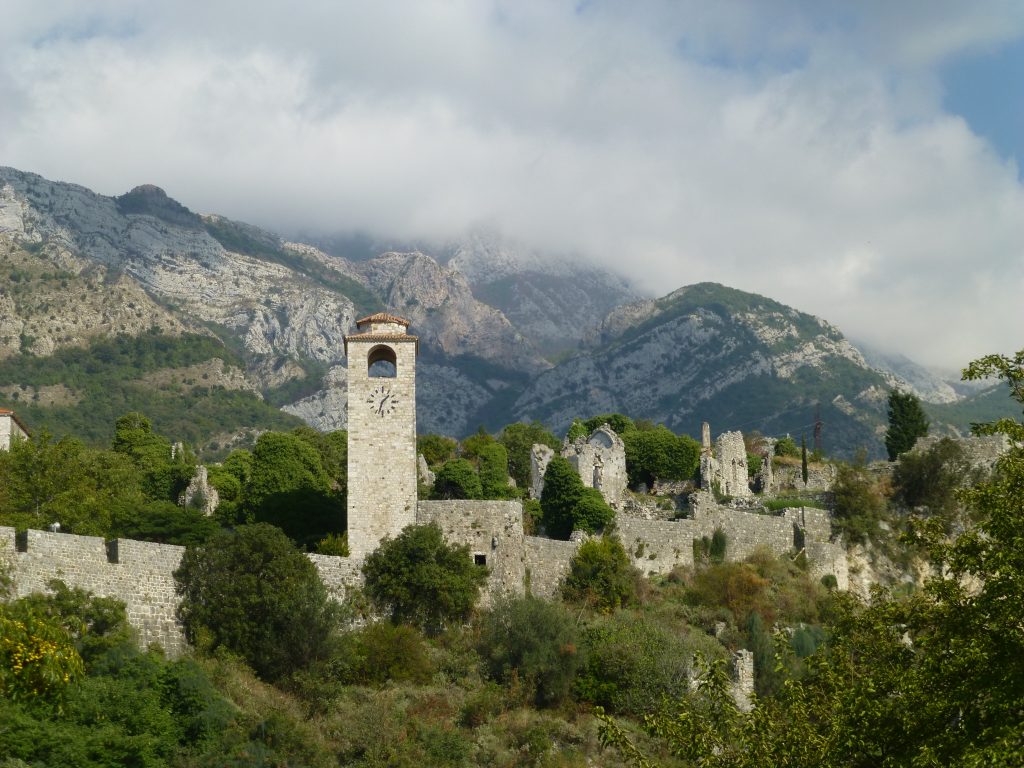 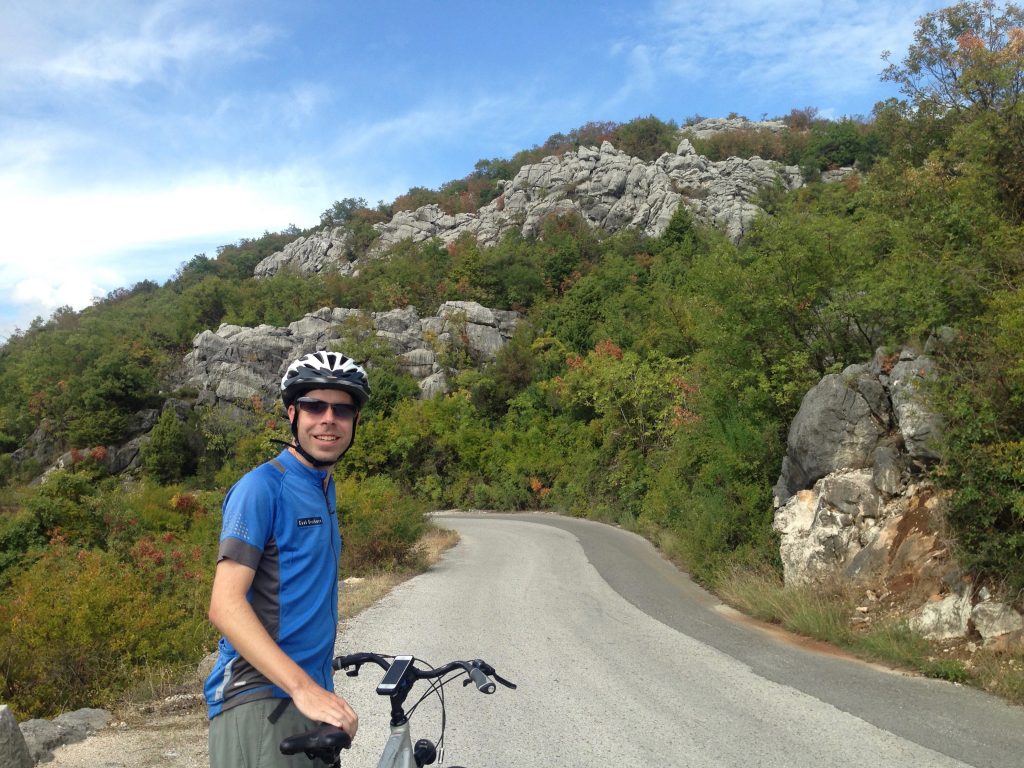 Logistics-wise, we arranged to rent two more bikes through 3e travel in Podgorica, where the friendly Angelika met us ahead of time to try out an electric bike and then offered to arrange our luggage transfer for a very reasonable price when we ended up renting a road bike and a touring bike instead. Having our luggage driven around made all our riding much easier, and my mom could go incredibly fast on her lightweight road bike! 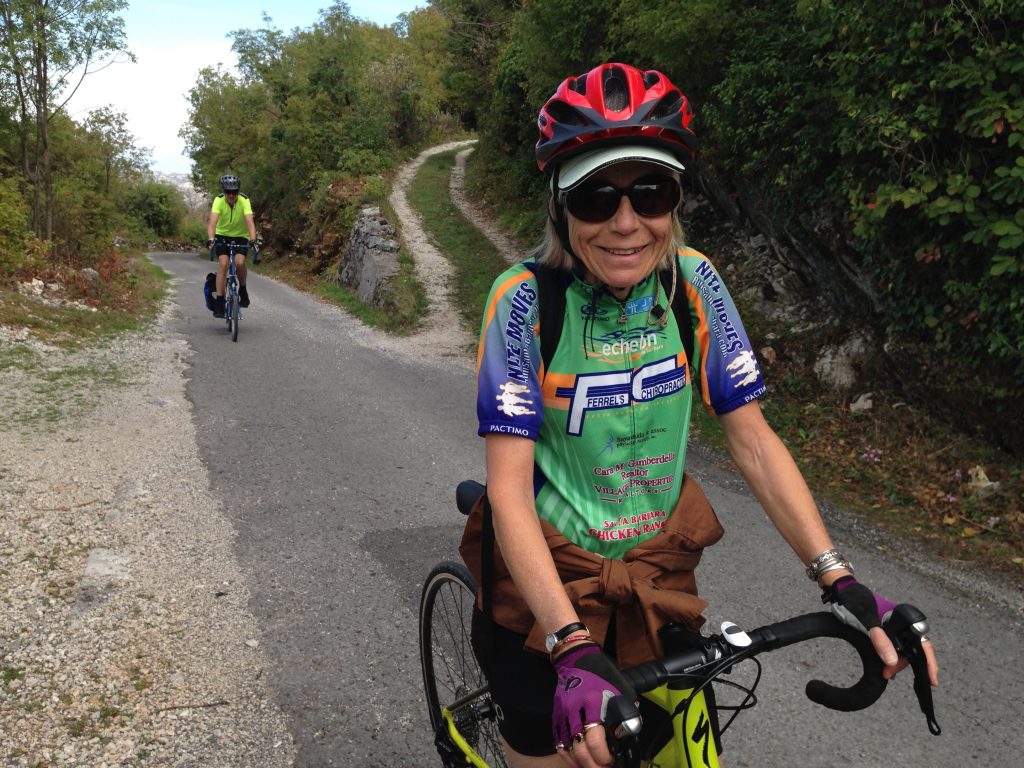 It was amazing. And beautiful. And everything a bike ride should be. 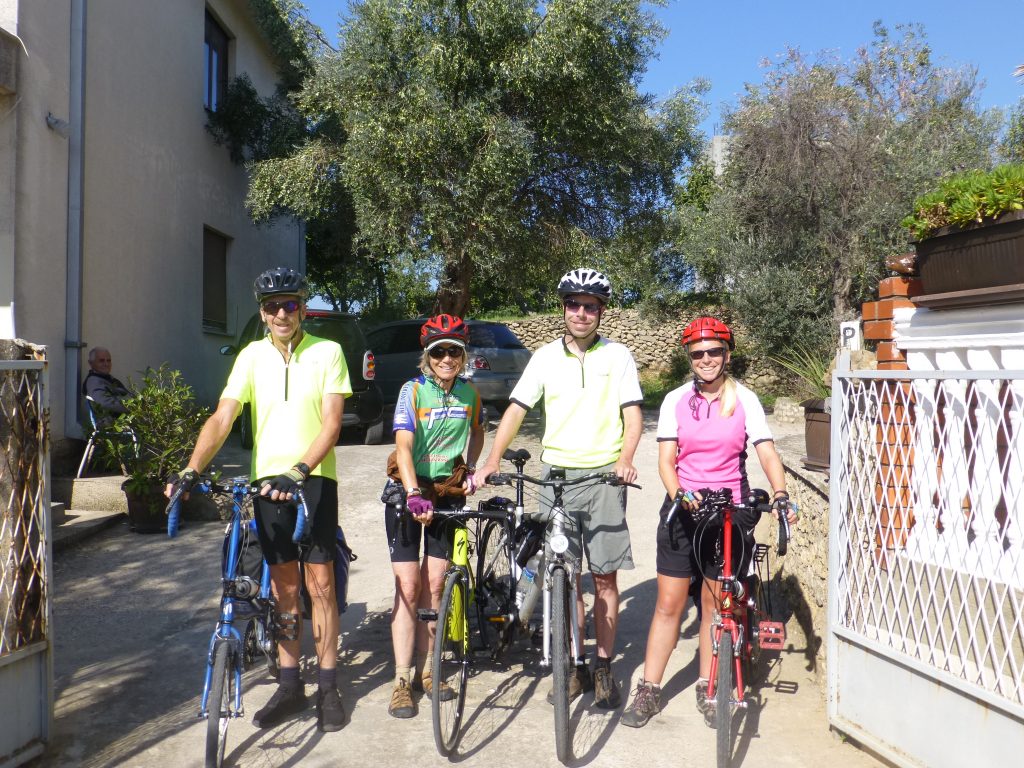 And when we rode back into Podgorica, we went for a walk around the city and then disassembled our bikes into their suitcases and returned them to their rightful owners – my parents – for their flight back to the US. It had been a wonderful, wonderful adventure, but it was sadly time for it to end.

For our last adventure, we planned a six-day bike tour along the coast of Lake Skadar and the Adriatic Sea near Podgorica. Well, really, Michael planned it, and my parents and I got to enjoy a deluxe self-guided bike tour complete with route planning and fancy apartments. 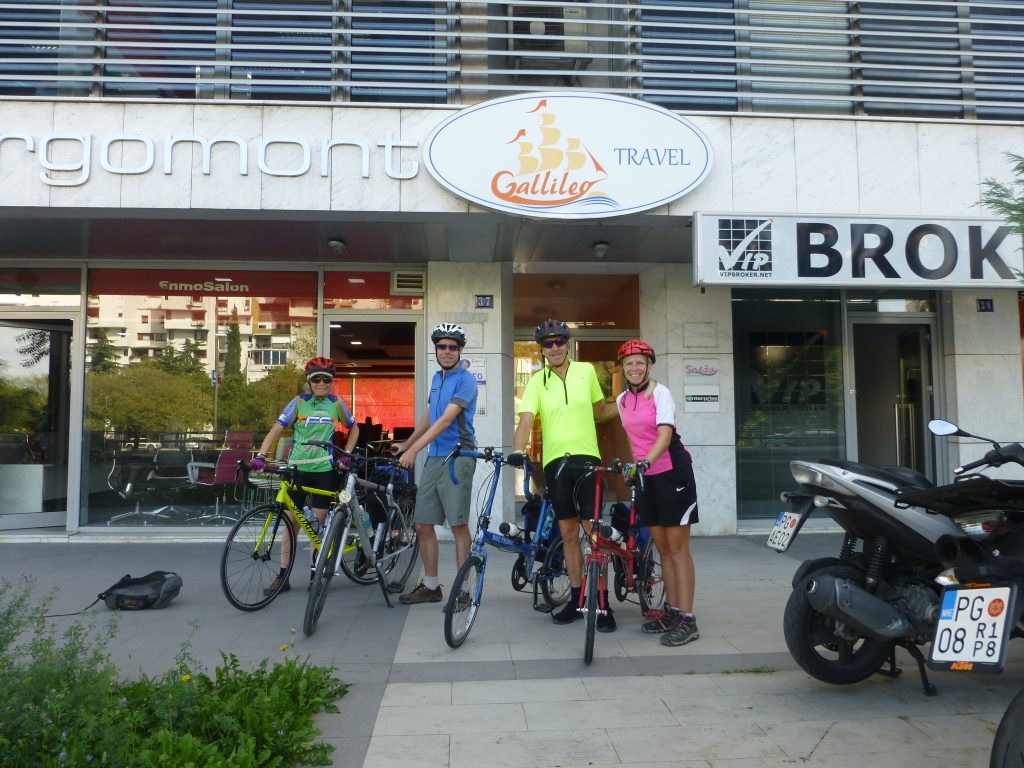 Our route is below, exactly as we planned it in Komoot – check out the next post for details and photos!

After five days of hiking in the Albanian mountains and staying on sheep farms, we all enjoyed hot showers and the return to civilization in Podgorica. My parents both fell ill with a mysterious gastrointestinal bug on our return to Montenegro, and we endured our worst housing glitch of the entire trip with a last-minute Airbnb cancellation and a nonresponsive Agoda host, but (silly us) we were confident things would soon look upward, and had booked a rental car for the next eight days for a leisurely drive to visit the highlights of Albania. 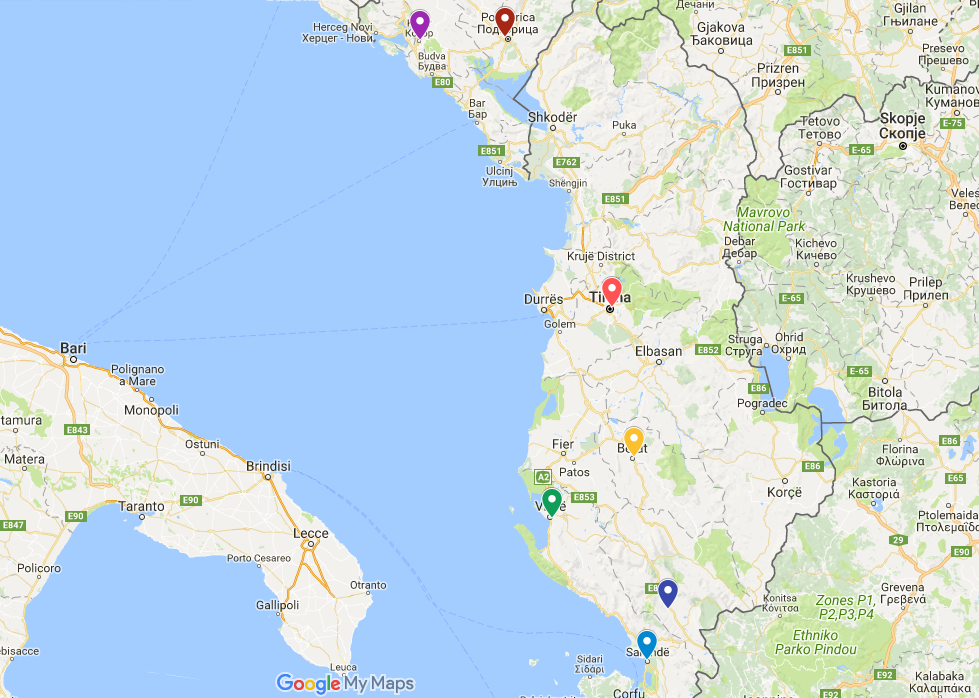 We connected capitals on the first day of our roadtrip, stopping only once on the three-hour drive from Podgorica (the capital of Montenegro) to Tirana (the capital of Albania) to view an amazing Ottoman bridge outside Shkoder: 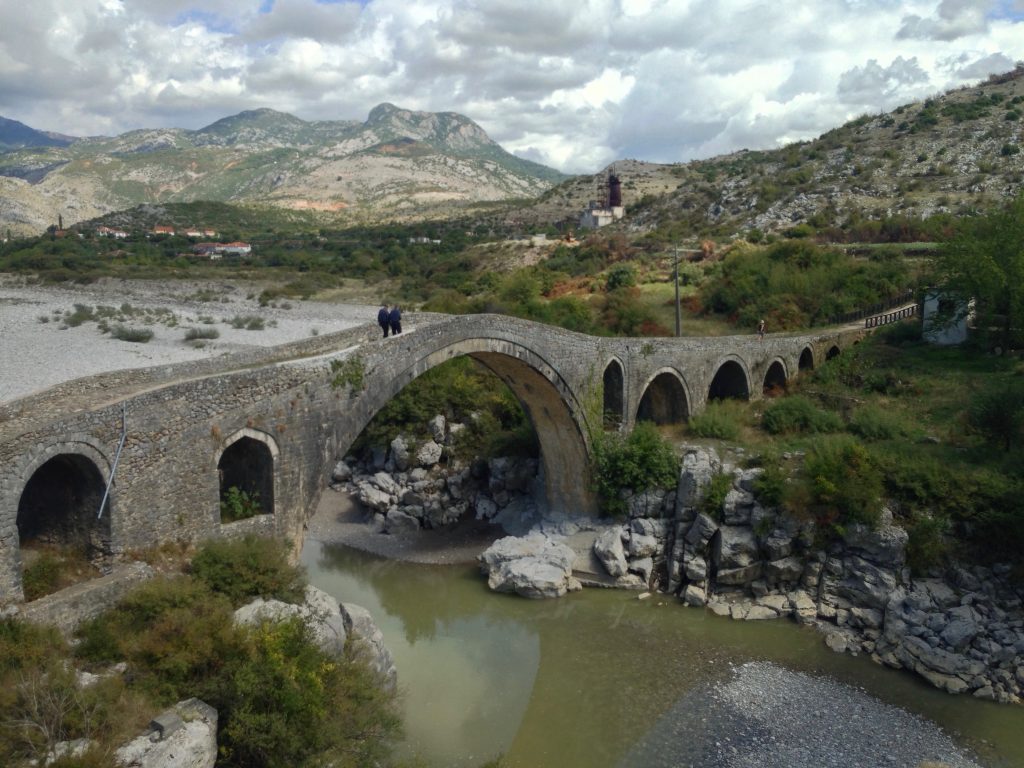 I had corresponded over the previous several months with the parents of a coworker of mine who worked at the American embassy in Tirana and were generous enough to send lots of advice on hiking and biking in the area as well as meeting us in person when we came to town. We spent a pleasant afternoon with Carl, visiting the giant nuclear bunker complex built by the dictator Enver Hoxha and then walking downtown to see the Pyramid, originally built as the Enver Hoxha museum by his daughter and son-in-law but now abandoned and graffiti’ed and used as a climbing gym. 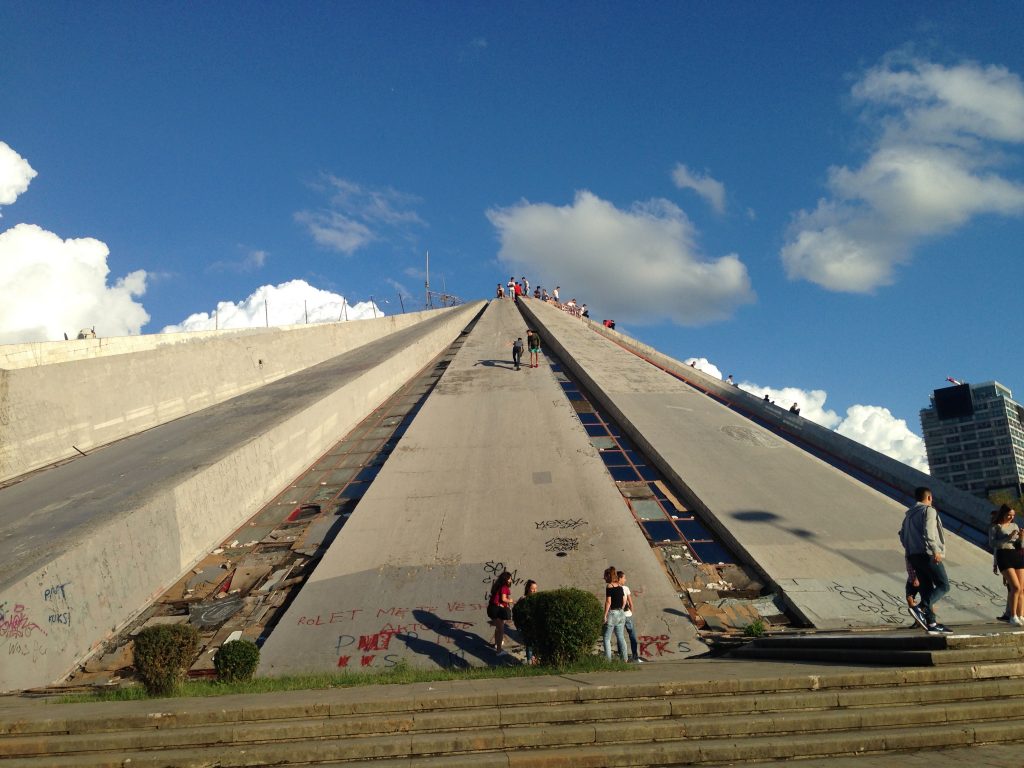 It was our first introduction to the turbulent history of Albania: the most Muslim country in Europe, occupied by Ottomans for hundreds of years until declaring independence in 1912, Albania was then occupied briefly by Italy before WWII and regained independence at the end of the war only to be ruled under the iron fist of Communist dictator Enver Hoxha, who originally allied with China and Russia but then completely shut off Albania from the rest of the world after China and Russia got too soft (as evidenced by Nixon’s visit to China and Khrushchev’s Thaw). Fearful of invasion, Hoxha spent the period from 1967 to 1985 building 200,000 concrete bunkers throughout Albania, many of which still survive today. Imports and exports were nonexistent, and every Albanian home looked largely identical because all the furniture was made in the same factories, with only a choice of three sizes and colors.

When Communism collapsed in 1991, kids would take turns trying out the same piece of chewing gum, and people used the colorful Coke cans to spruce up their living room decor. (Our guide asserted that Albanians’ poor driving grew from their isolation from the modern world!) Unfortunately for Albanians, the end of Communism wasn’t the end of their suffering: a government-endorsed pyramid scheme collapsed in 1997, causing some 70% of the population to lose their life savings and sending the country into complete anarchy and chaos. Italy intervened and things stabilized, with a tremendous amount of development occurring over the last 20 years. Blogs we’d read about driving in Albania only a few years ago were completely outdated, and several times we found ourselves on new multilane highways that didn’t exist on Google Maps at all. (We also found Google Maps telling us to turn the wrong way down a number of one-way streets, presumably because merely observing traffic patterns was insufficient to tell Google about the streets’ directionality, given low rates of adherence to traffic laws.)

Thus introduced to Albanian history, we left Tirana the following morning for the UNESCO world heritage town of Berat, the Ottoman “city of a thousand windows.” Matching white houses with brown roofs climbed uphill to a castle perched above the river, with an entire village within the castle walls! It was picturesque and fairly quiet, with cats wandering the cobbled streets, and made for a good midday stop before we continued on to the coast at Vlore. 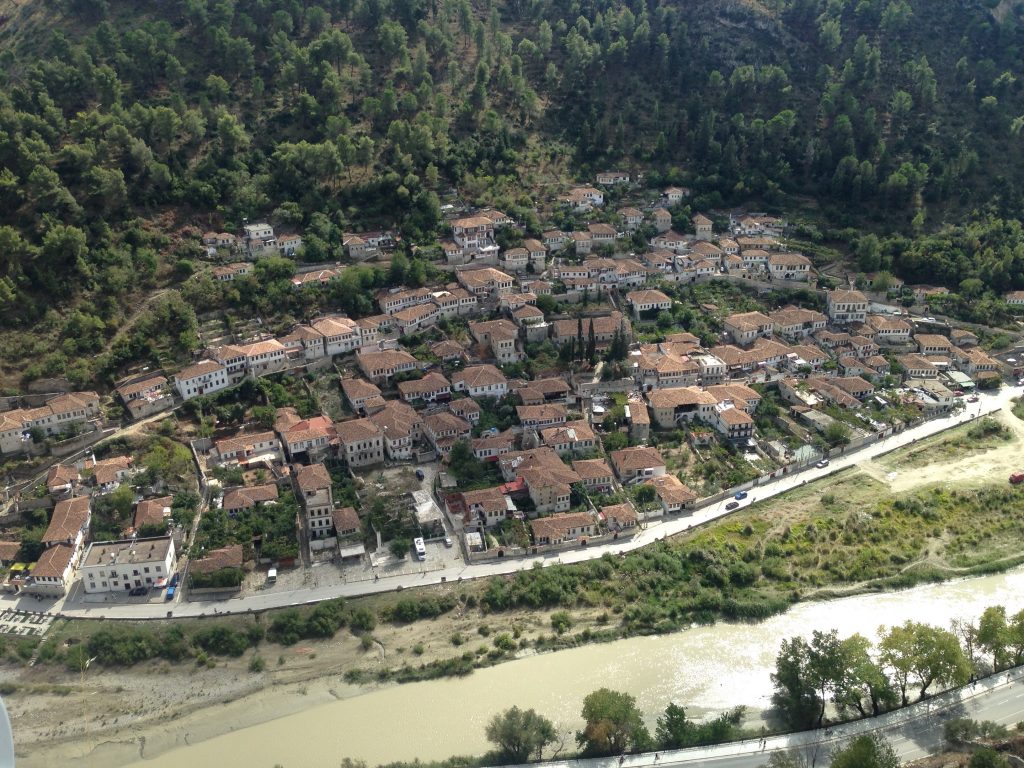 We had a quiet night in Vlore as my parents continued to recover from stomach bugs, then headed down the coast. The drive was absolutely gorgeous, with crystal clear turquoise water, tremendous views from a mountain pass, and a three-pointed Ali Pasha fortress to explore as we made our way down the coast.

We spent two nights in Sarande, in the far southern coast of Albania, in a luxurious 3 bedroom apartment with fabulous views of the city and beach. It was the perfect place to have built extra time into the schedule, as Michael and I soon fell victim to aforementioned stomach bug, and the four of us had little energy for much exploration, though we did make a day trip to the (you guessed it, UNESCO) ruins at Butrint.

From Sarande we headed inland to Gjirokaster, a sister city to Berat and jointly named as a UNESCO world heritage site. It’s better known but I found it less enchanting, perhaps because I was unable to find the ruins of the Ali Pasha aqueduct and because our dinner restaurant was out of all but three dishes. Nonetheless, we had a pleasant afternoon wandering the castle and the cobbled streets and admiring the unique Ottoman architecture. 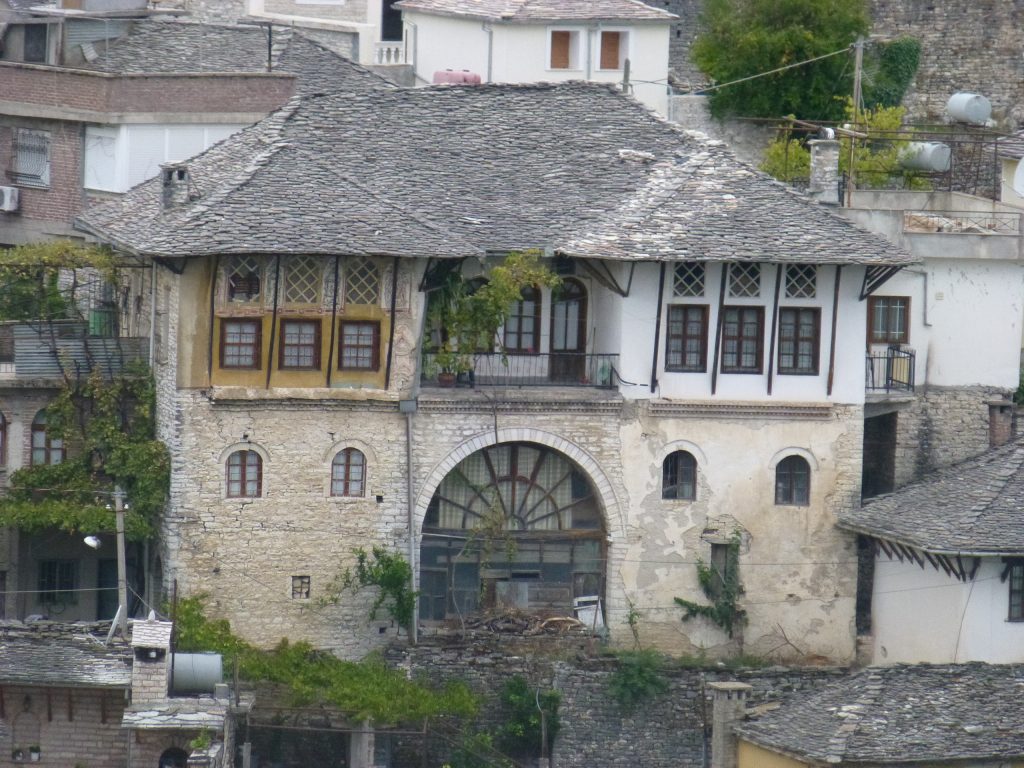 On our last day in Albania, we stopped first at another Ali Pasha viaduct and then at the Greek ruins of Apollonia, founded in 588 BC (!) and prosperous until the third century AD, when its harbor began to silt up. It made for a good lunch spot before we headed back to Tirana for the night, where we’d stored the bike suitcases after mailing them from Poland a few weeks ago. 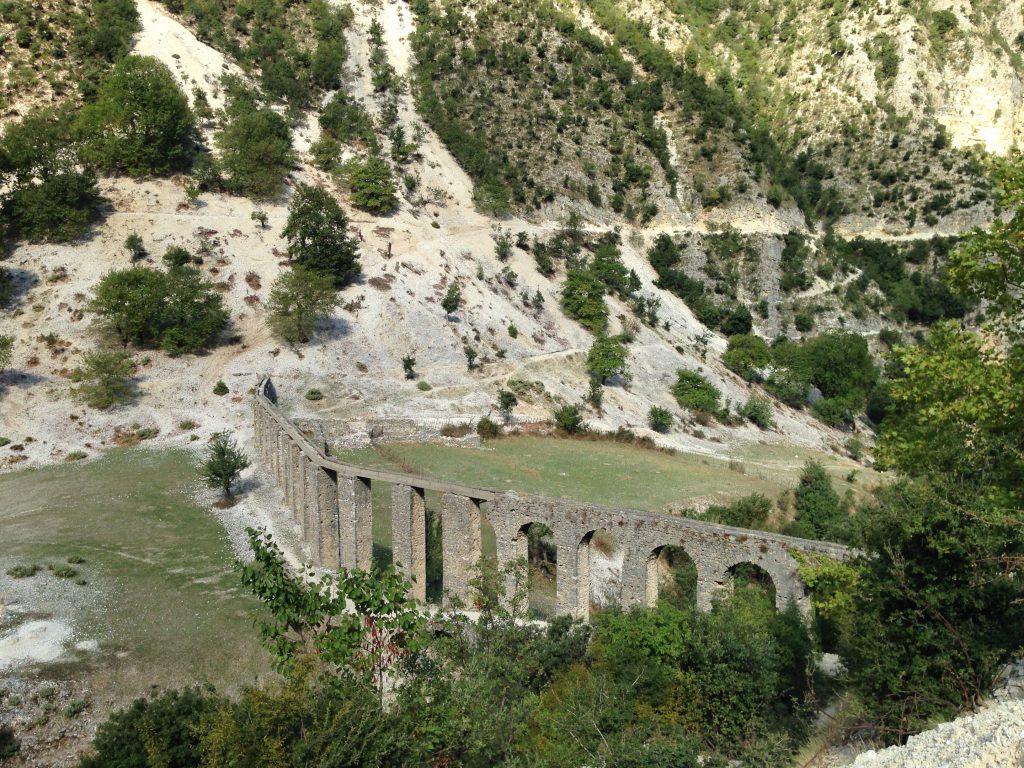 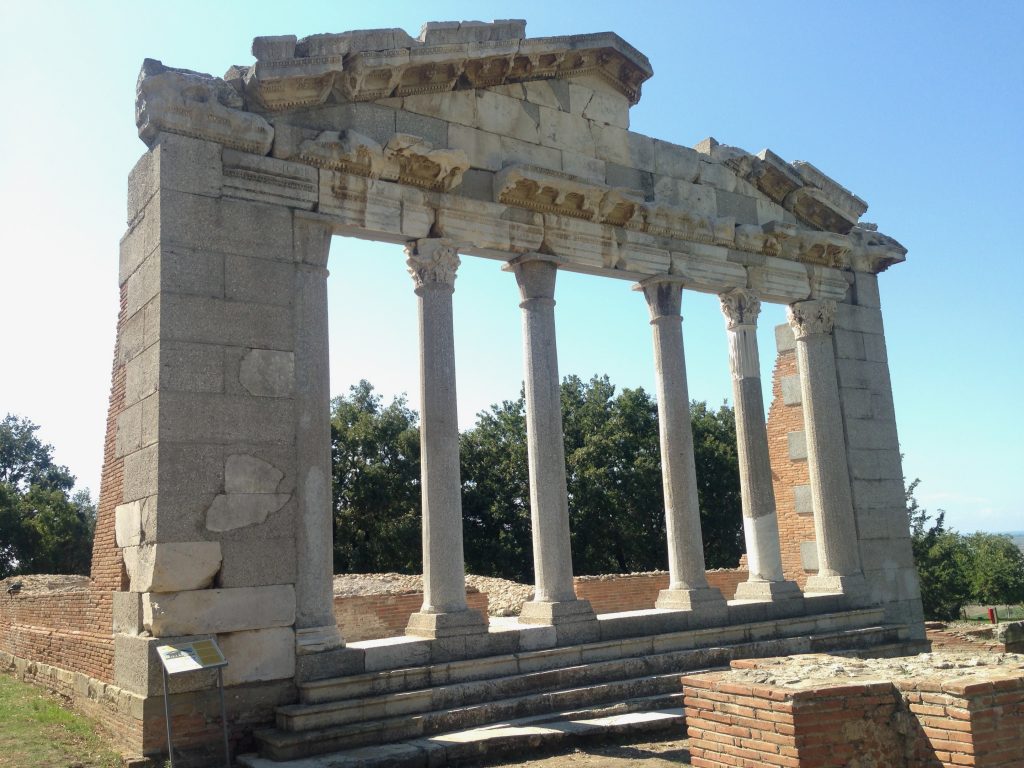 From Tirana we drove back into Montenegro, but not before stopping at Shkoder’s imposing castle for lunch. Legend has it that when three brothers set about building the castle, they agreed that a human sacrifice was necessary and decided that (a) whoever’s wife brought them lunch the next day would be the chosen one and (b) none of them would tell their wives, as they all took turns bringing lunch in an irregular pattern. Of course the two older brothers secretly told their wives, and the youngest brother’s wife, Rozafa, was chosen to be buried within the walls of the castle. Hence its name Rozafa Castle. Lovely, eh? But it did make for a beautiful lunch spot, and we stopped at a few towns along the coast in the afternoon as we made our way north. 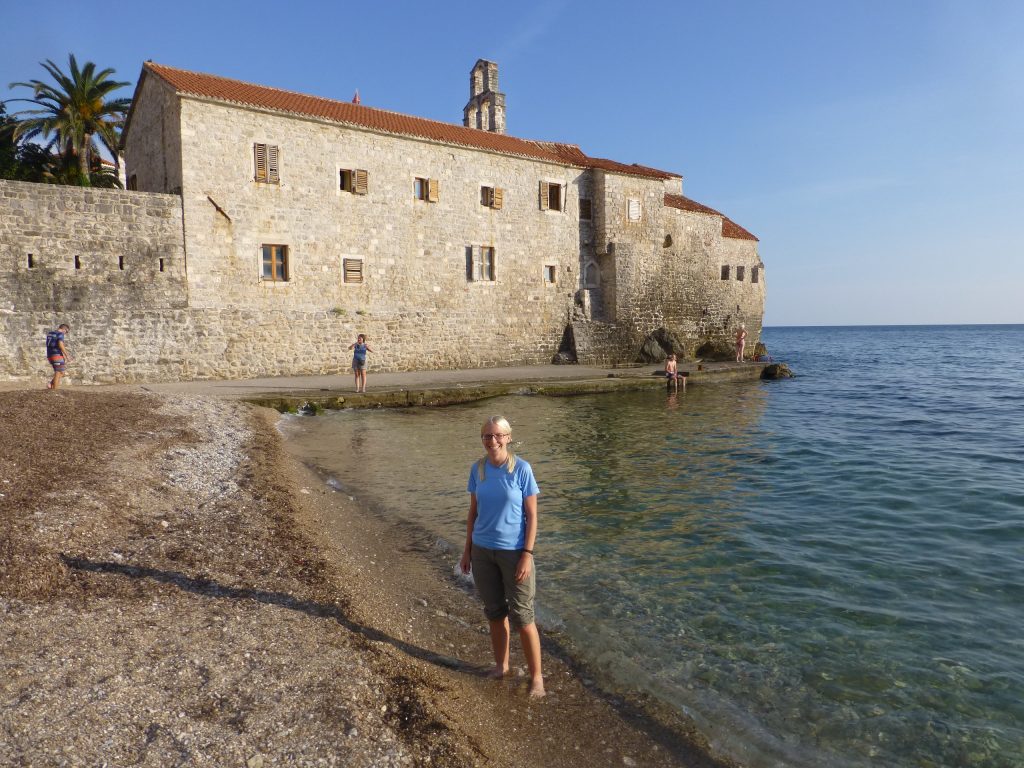 Our last day of the roadtrip was spent in Kotor, a beautiful – and much more visited – town on the Montenegro coast. A former Venetian stronghold, it boasts a well-preserved old town and a stunning fortress built into the mountains above town with a series of walls and staircases. We climbed up the old walls in the morning, returning to old town just as it started to rain and hiding in a tavern for lunch before starting the serpentine drive up two dozen tight switchbacks on a barely-two-lane road up into Crna Gora, the namesake of Montenegro. The views – both from our walk and from the drive – were absolutely jaw-dropping. 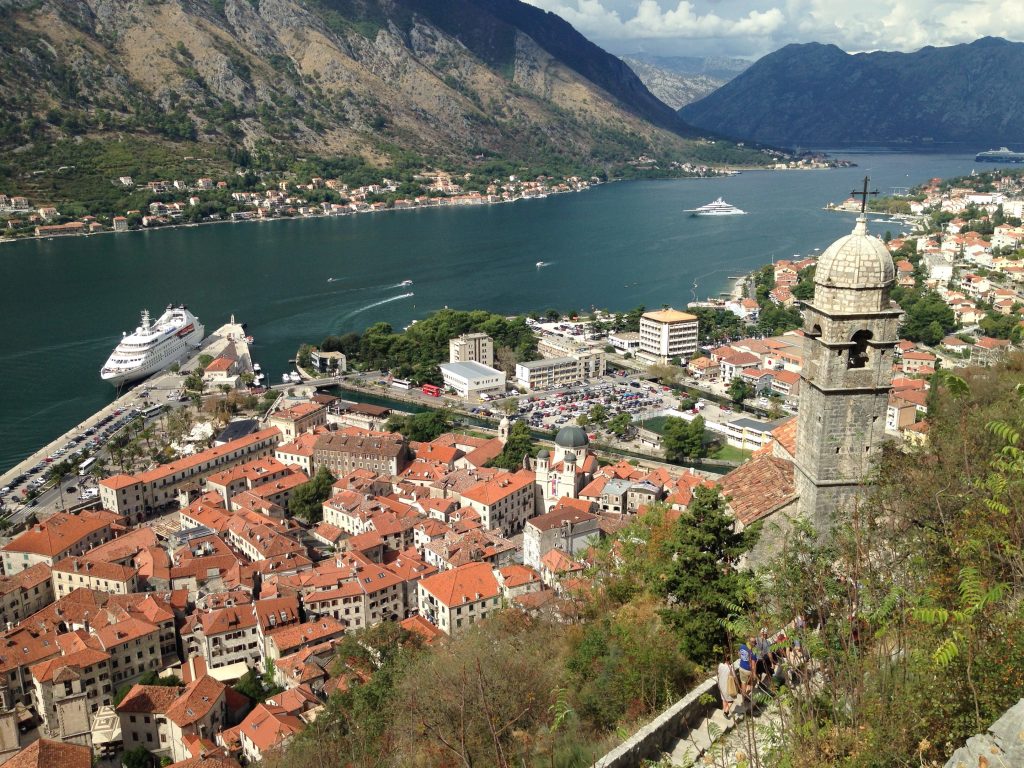 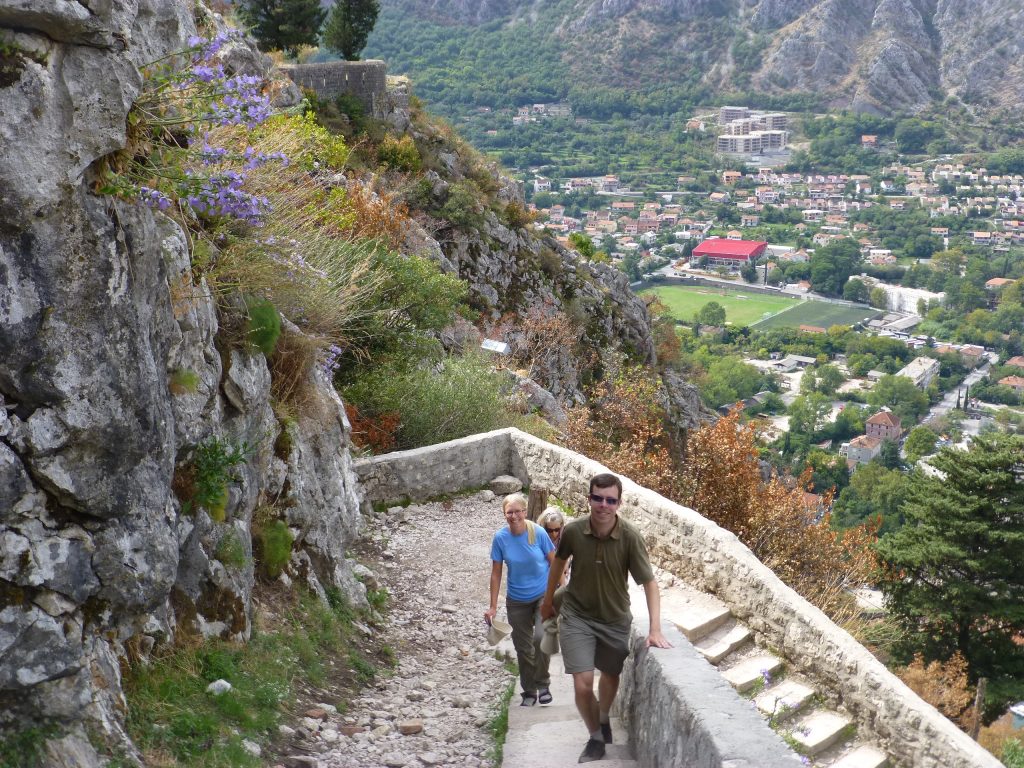 And so our roadtrip ended on September 28, as we drove back into Podgorica and back to the Airbnb where our adventures with my parents had begun. Luckily, we all felt largely recovered from our stomach bug as we drove into Podgorica. Feeling better was somewhat mandatory, as the next morning we embarked on our next adventure: biking through the hills of the Montenegro coast!