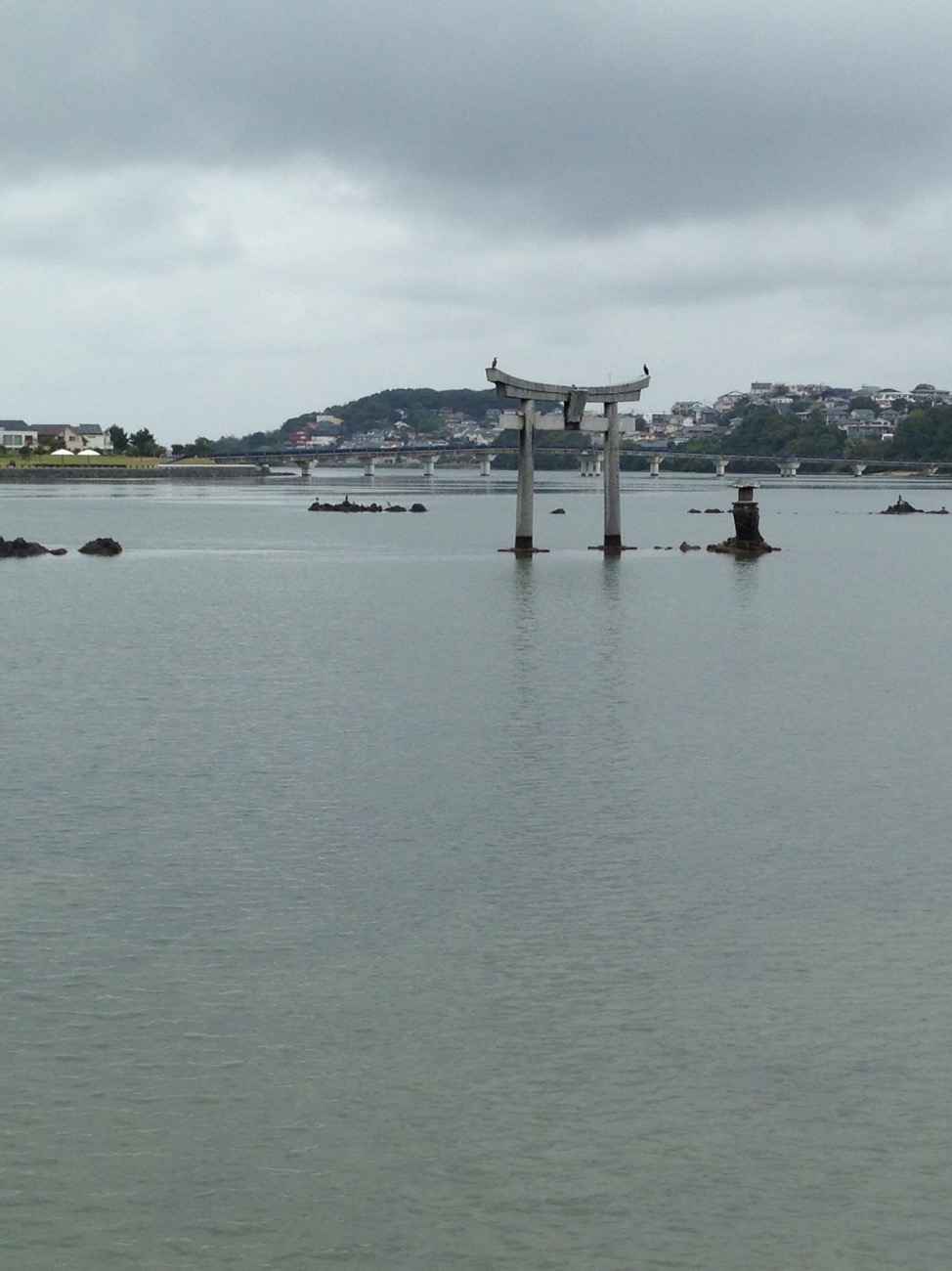 So, I’m a few days behind on posting, and we also have an exciting  blog post from Michael, but first I wanted to write about our adventures today.

We’re in Fukuoka, Japan, now, and since the forecast was for scattered showers we decided to go for a quick bike ride out to a peninsula with a city park and nice views back to the city itself rather than venturing further out of town. But first, our hotel had a “Gourmet Guide” of neighboring restaurants showing that there was a Choco Cro (short for chocolate croissant and one of my favorite foods on our first visit to Japan) nearby, so we headed out to get breakfast. But the building it was in – a giant shopping center next to the train station – seemed to be locked.

When we went to the main entrance, it was closed too, and dark, with a lot of soldiers or policemen guarding the doors. At this point we realized we had received an emergency alert from the government – we’ve gotten a few of these, the previous one for heavy wind on Jejudo – and slowly used Google Translate to understand that a giant sinkhole had formed in front of the main Hakata train station, a hundred yards or so from our hotel and from the Choco Cro we sought. Power was out in a number of buildings and streets around the station closed, plus the emergency alert notified us of an evacuation order for … well, for some of the places around the station, but we didn’t know where exactly. 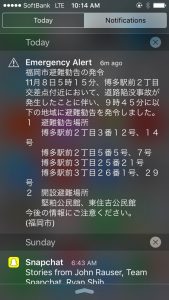 So we decided to retrieve our bikes and head out – presumably away from the station, we’d be more likely to find food and less likely to disappear underground in a giant sinkhole. Did I say underground? Our bikes were in an awesome underground bike parking garage with thousands of sliding racks for the train station, with a conveyor belt ramp that carried your bikes up to the ground level for you! We paid our $1 parking fee and off we went.

We found a nice small road along a canal and meandered on it for several miles with very little traffic. It began to drizzle lightly, but not enough to bother with raincoats for a while, and just as it started to rain a little more heavily we found a big grocery store where we got breakfast: a prepared Japanese breakfast with soft boiled egg, salmon, lotus root, seaweed, radish, roasted pumpkin, and so on, as well as what we dubbed the Japanese Egg McMuffin: egg and ham wrapped up in rice and seaweed rather than in an English muffin! We ate in the shelter of the bike rack roof and then headed out, along back roads and out to the port, where a series of bridges led to the park that was our destination.

Soon, however, I realized that I had the first flat tire of our biking adventures here – and that we’d decided today not to bring our kit of tire levers, spare tubes, and pump. We’d decided this in part because we’d belatedly realized that our wheels weren’t quick release and we didn’t have a wrench yet, so what good would the rest of the tire-changing gear do us? But of course now we were in the middle of a big industrial area, 6 miles from our hotel and another 6 from our destination, stuck with a flat, in the now steady rain.

We ducked into a local supermarket, where we bought a wrench and looked up our options. Walking home would take 2 hours, but Google couldn’t find any nearby bike shops – until Michael tried searching in Japanese and located Masaya Bicycle Works, only a mile and a half away. We walked over there through various back streets only to discover that they’d decided to take the day off! Luckily, they ran a bike cafe as well as the bike shop, and the barista typed into Google maps and magically came up with another bike store just a few blocks away! We found it without difficulty, and 20 minutes and $8 later, I had a newly patched tire.

It was by now 2:30 in the afternoon, but we decided to press onward and see if we could make it out to the park. We’d read there was a ferry back, though we weren’t entirely sure where it departed from; we’d check out the ferry and either explore further or hightail it back into town if the ferry wasn’t running. Of course when we got there it turned out the completely abandoned park (aquarium: closed; amusement park: closed; ferris wheel: closed) nonetheless charged a stiff admission fee, so we biked along the road instead and soon found the ferry dock and established the time of the next two ferries and that bikes were allowed on board.

From there we had a lovely ride around a small island linked to the mainland (er, the big island of Kyushu) by a narrow isthmus with sand on both sides and lovely views of town. The coastline was winding and scenic, with views out to more islands and back to the mountains that form Fukuoka’s backdrop. The drizzle continued unabated, but we made it back to the ferry with ten minutes to spare and enjoyed chatting with two women who turned out to be from Seattle and NYC and were in Japan for a JET (Japan English Teachers) reunion after having taught English in Japan 10 years ago. They even offered us snacks since ours were buried deep in our plastic-bag-wrapped backpack.

We arrived back in Fukuoka just after dark, but easily navigated along the sidewalks and canal back to our hotel. Fortunately, the first part of the ride was covered by an overhead expressway and thus very dry. Unfortunately, the rain turned from drizzle to quitea downpour just as we emerged from cover, and so by the time we got to our hotel we were thoroughly soaked through! Now we’ve showered and dried and are getting ready for tomorrow’s bike adventure – heading west to the town of Karatsu, where we’ll stay overnight in order to explore beyond it the following day.

So in the end, we are wet but none the worse for wear – and enjoying watching unending footage of the sinkhole from our cozy, warm hotel room.