After three wonderful days of biking the west coast of the Noto Peninsula and then across the lush farmland of its center to the east coast, we had four full days to explore the east side of the peninsula, less whipped by wind and waves. Two gorgeous days of sunshine allowed us to explore the middle of the peninsula fully, collecting memories as we went. On our first day we rode from Mawaki Polepole to the town of Anamizu, hugging the coast for beautiful views and stopping in at a bakery for a mid-morning snack only to find a group of Australians also bicycling a similar route! They were fascinated by our folding bikes, and struck up further conversation when we ran into them again later that day. But the best part of the bakery was the chocolate mochi: a mochi-based pastry filled with a thin layer of melted chocolate, at the low low price of 70 cents. Soooo good.

We rode for a ways on the main road, with a wide shoulder and little traffic, then diverted down to a small coastal road that wove past Japan’s largest monument to a sumo champion (whose reign was in the 1820s) and some beautiful villages with picturesque shrines. We love Japan: even on this tiny one-lane road, every blind curve and intersection sported a mirror so you could see traffic coming the other direction! We had a fabulous ride down the coast, ending at a bakery whose selection had dwindled but where we nonetheless found plenty of fodder for lunch. 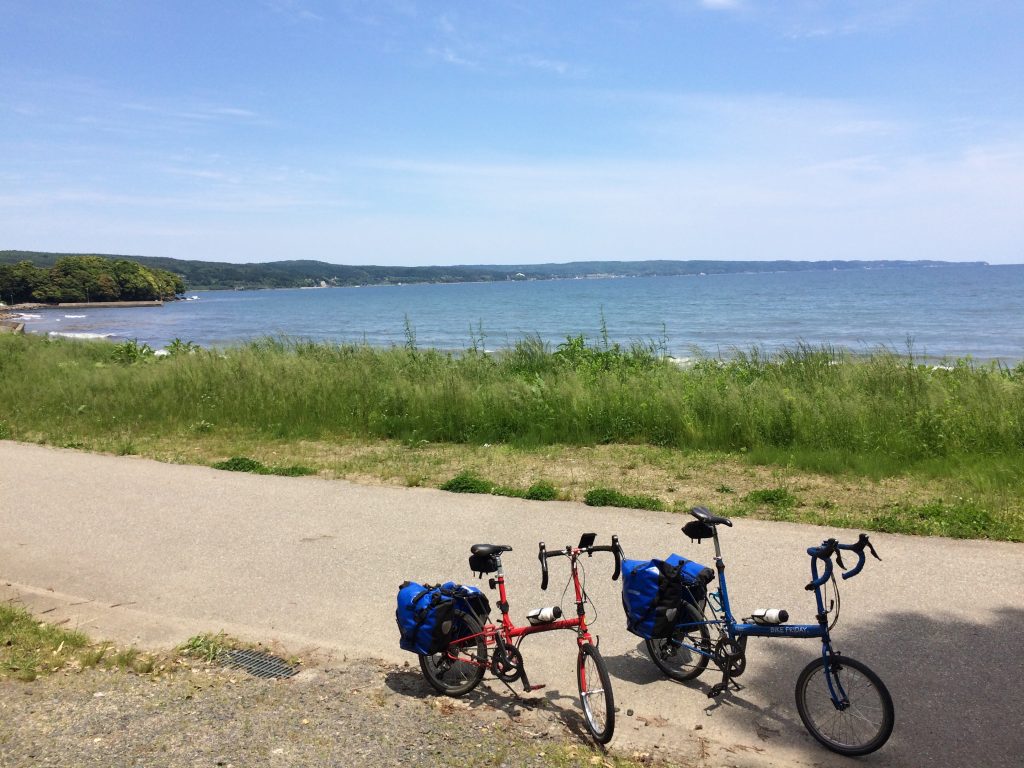 On the following day, Komoot found us a route parallel to the main road but slightly inland, with rolling hills through rice paddies and gardens with views down to the sea below. Only once did a long snake block half the road, causing some unwanted excitement when I was halfway down a hill!

We only had a ten-mile ride to our next hotel, so we dropped off our bags around 11 in the morning and added on another 52 km to circumnavigate the island of Notojima. Our original destination was the Notojima Glass Art Museum, but on such a beautiful day it seemed like a shame to go inside, so after walking through the outdoor sculpture park we continued onward – and were immediately delighted by the sight of a dozen dolphins cavorting in a bay just a few hundred feet offshore! 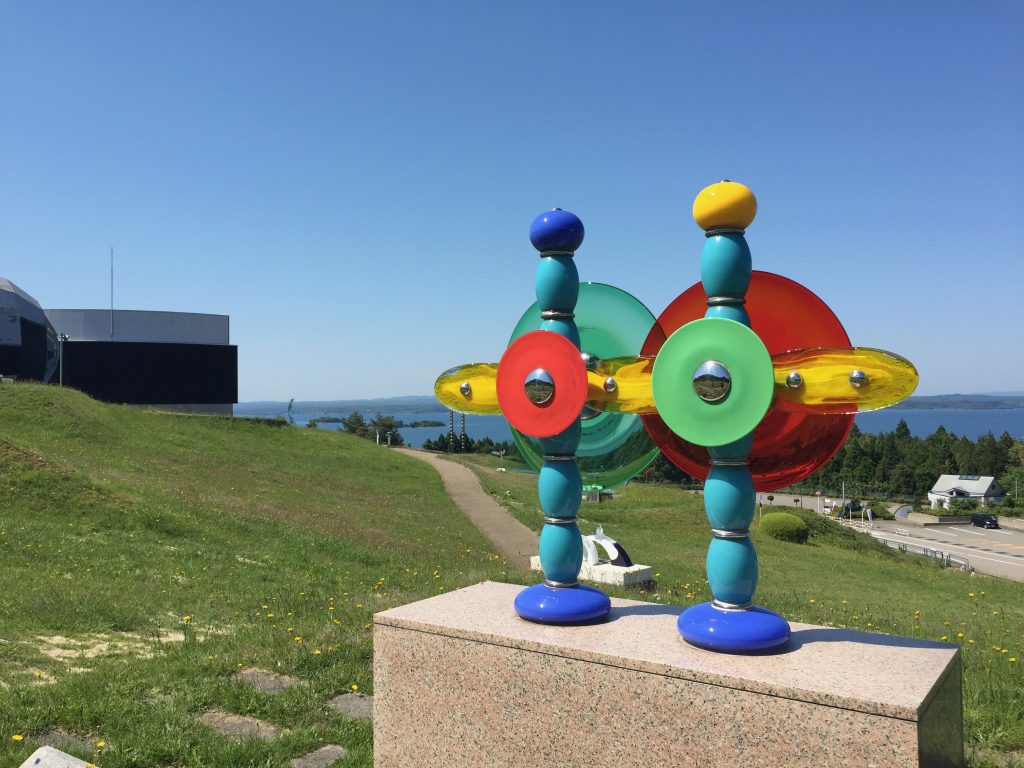 The island coast was less spectacular than we anticipated but made for a very pleasant bike ride. The Japan Alps poked out from the clouds; we listened to the birds and the frogs singing and admired the eagles soaring and diving; and except for a short stretch with some traffic, we encountered almost no cars. We made it back to our hotel around 6pm and quickly washed up for dinner in the hotel restaurant: another multicourse affair of tempura, pork hot pot, sashimi, rice, soup, and various pickles, in a dining room where we were some of the only people not dressed in the hotel’s loungewear.

We had watched the weather forecast carefully and knew the following day would be rainy, so we timed our departure to the forecast for the least rain and decided to head directly to our hotel in Nanao rather than taking a more circuitous route. Luckily for us, after four nights in tiny villages, Nanao would be a real city, with plenty of places to while away the time until our hotel allowed us to check in. Even more luckily, the forecast rain hardly materialized at all: a light mist fell as we biked, but we managed to stay largely dry as we bicycled across the two bridges to town. We had our choice of restaurants after several nights in tiny towns, and opted for our first okonomiyaki of the trip, including one made with octopus and udon! 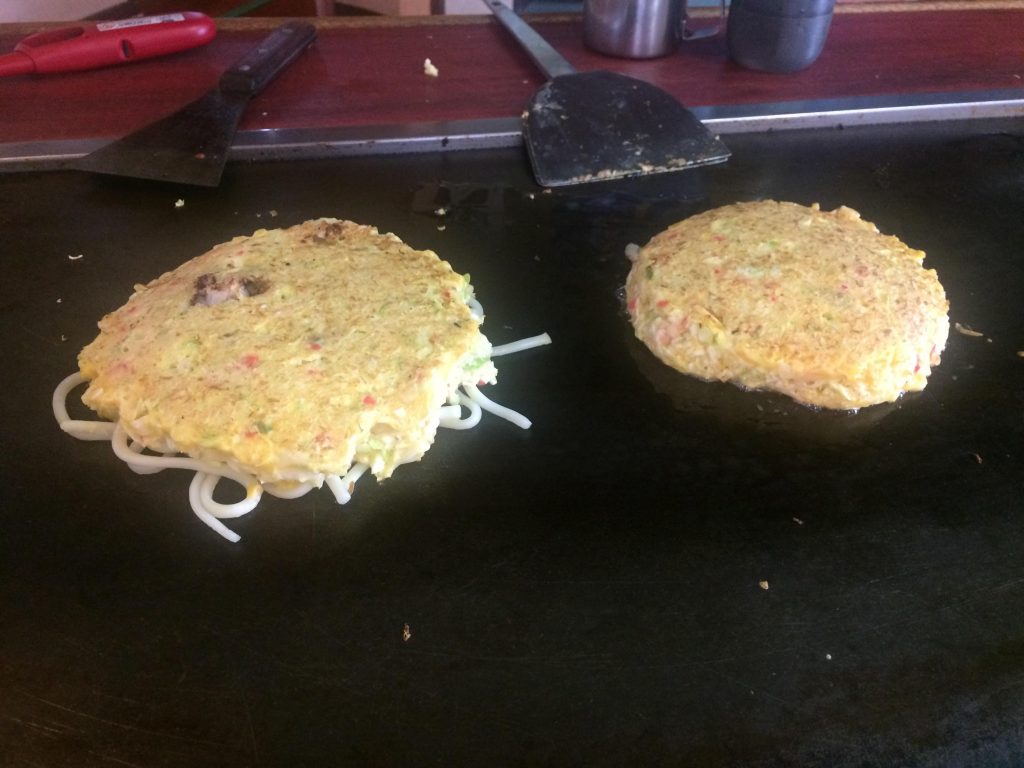 We spent a quiet afternoon in Nanao, exploring the Fisherman’s Wharf and watching the huge hawks navigate the strong wind before relaxing in our hotel and walking to a nearby izakaya for a dinner of tempura udon and tonkatsu. The next morning, the mist and fog blew off just as we headed out, and we had another gorgeous day of sunshine along a beautiful coast. 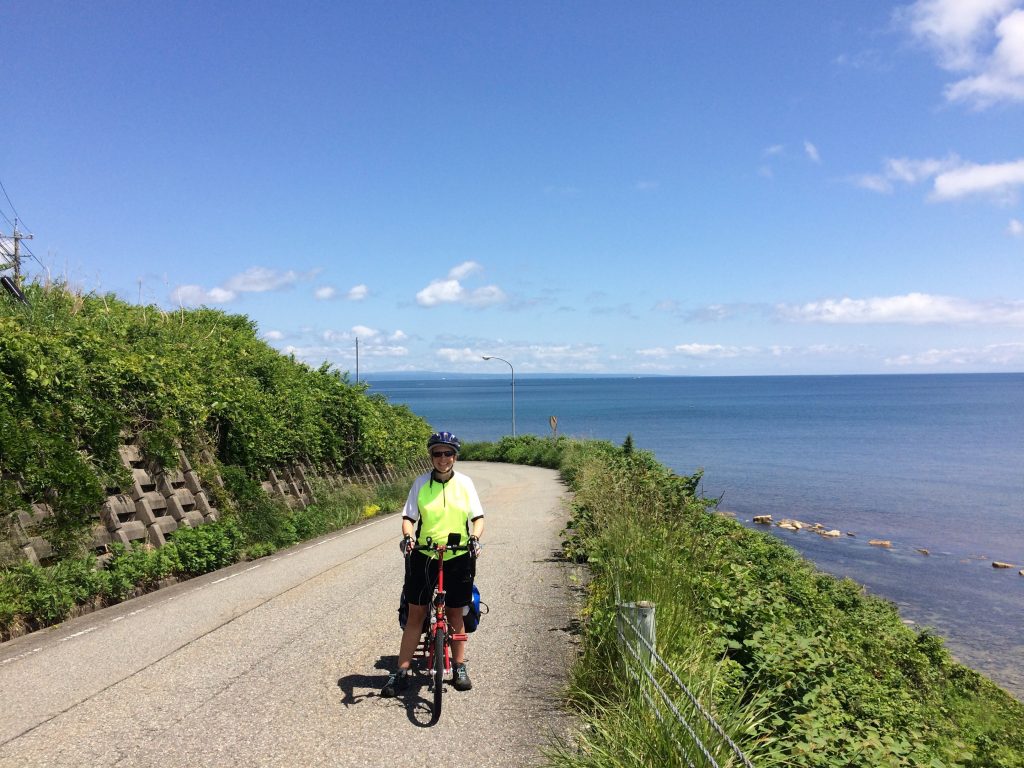 We again had the road almost entirely to ourselves, and the water was amazingly clear. The Alps slowly emerged from behind the cloudbanks and we had some great views of islands and beaches along the way. I admit I had kind of expected the last day to be a bit of a slog from looking at the map, but it far exceeded expectations! As we approached the town of Himi, we even discovered blue markings on the road, a sure sign of a bike route, and followed the Toyama Bay Cycling Course for a good dozen kilometers or so, including a beautiful stretch of beachfront bike path. Its presence on the English-language internet is small enough that we hadn’t even realized it existed, and it was delightful! We followed it all the way into Takaoka, then turned onto a series of small streets to head inland to our hotel next to the shinkansen station. 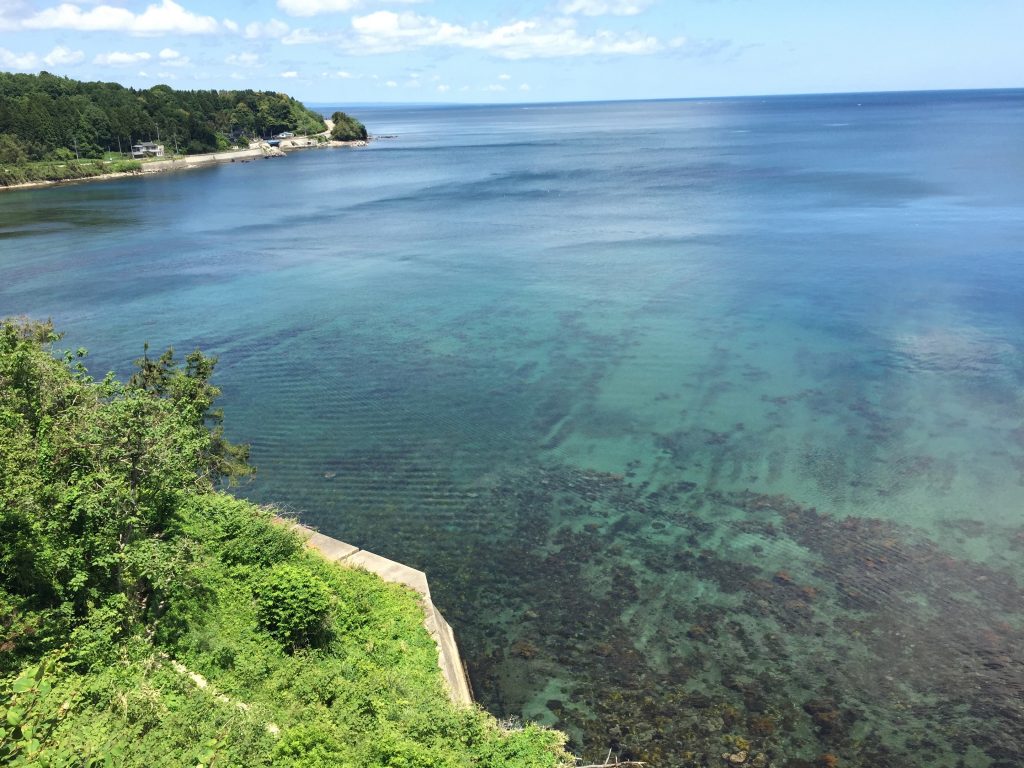 We arrived at our hotel around 5pm and found that our suitcases had successfully made it – thanks, Yamato luggage service! – so we spent an hour disassembling the bikes and showering before heading to a nearby ramen restaurant for a quick dinner, and fit in a few games of Innovation, our favorite card game, before bed. We decided to take the 1:10pm train into Tokyo the following day to give us some time to relax and explore Takaoka, and for 27100 yen (about $250) we reserved seats. More expensive than our $99 plane tickets from Tokyo to Komatsu, but awfully convenient.

Takaoka turned out to be a bit of a ghost town: the streets were empty, the shops mostly closed, and not much was going on. But we wandered the street of traditional storefronts and looked up at Japan’s third biggest Buddha statue before getting some ramen and some snacks and hopping onto the shinkansen for Tokyo. 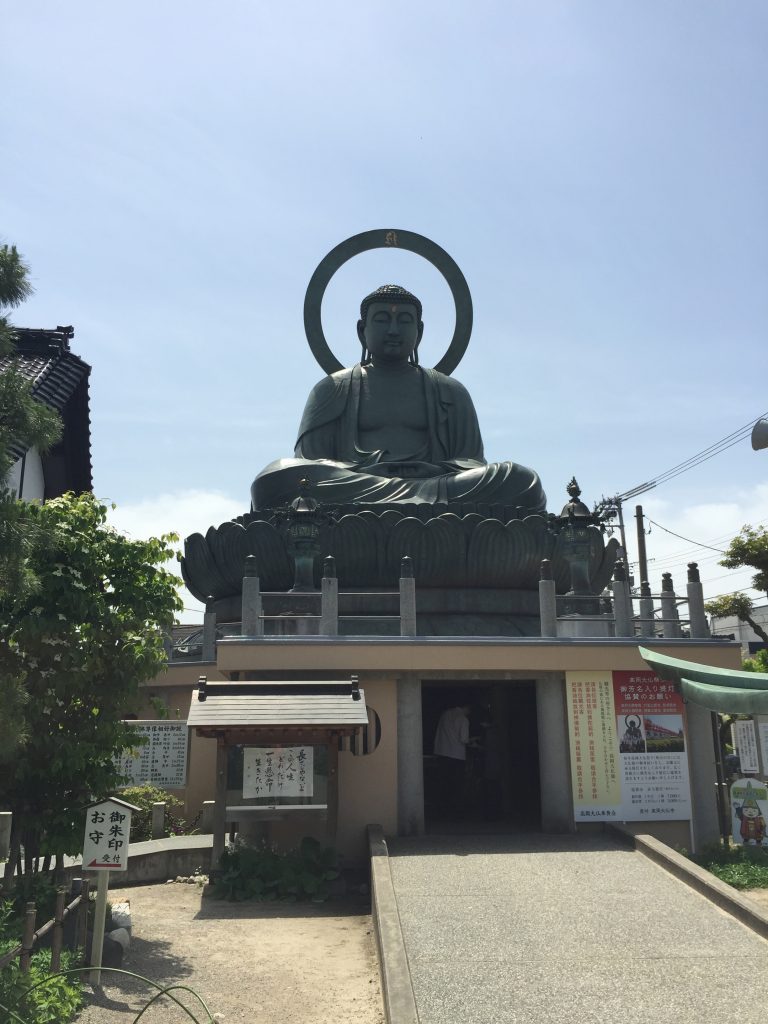 After less than three hours of hurtling across the countryside, we arrived at Tokyo station, where we saw more people in ten minutes than we had in seven days of bicycling through rural Japan. And now we are happily ensconced in our delightful Akihabara hotel, surrounded by restaurants of every type we might possibly dream of and mesmerized by the constant flow of people across the wide, busy intersections. Tokyo really is a place unto itself. Today we wandered through Akihabara and Ueno, stopping at the annual festival of one of the nearby shrines and at dozens of tiny 100-yen shops and artisanal workshops and everything in between.

We will leave Japan with many happy memories: of crabs scuttling across the bike path, of frogs singing from the hundreds of rice paddies, of the hawk that stole a hapless Japanese tourist’s ice cream cone, of the giant caterpillars we encountered on portions of the road, of the ubiquitous bearded cranes and the stunning Alp views, but especially of just how wonderful it is to explore on two wheels, with the sun and the breeze and the feeling of really being a part of the places we explore. Should you ever seek out a biking destination, we can highly recommend Noto!

One more day in Tokyo and we head home … time to cram in as much ramen and choco cro as possible in 24 hours!