On our second day in Gyeongju, we debated hiking on Namsan, a mountain strewed with hidden carvings and ancient temple sites; visiting a folk village; or biking to the temple of Bulguksa. Lonely Planet’s description of the last of these options convinced us to head its direction:

“On a series of stone terraces about 16km southeast of Gyeongju, set among gnarled pines and iris gardens that would make Van Gogh swoon, this temple is the crowning glory of Shilla architecture and is on the Unesco World Cultural Heritage list.”

OK, that sounds pretty good. After a delicious pastry breakfast at Paris Baguette – the ubiquitous chain that nonetheless manages to have such quirky selections of pastries in each location that we have yet to have the same breakfast twice – we paused in the hanok village, where a group of serious-looking mountain bikers soon showed up for a pit stop. Serious looking they might have been, but within a few minutes they were testing out the dart-throwing games in the town square, and taking selfies with this anomalous blonde biker they’d happened across. From the village, we left the main road for a series of winding country roads southeast of town, through small villages and farms. After a few kilometers, I spotted a sign for “Rock-carved Seated Buddha in Bulgok Valley of Namsan Mountain,” just 700m up a narrow but paved road, and we made a short detour. After bicycling uphill for 300m, the road became a small dirt path, so we locked our bikes and hiked up the mountain for a few minutes to arrive at a small carving of the Buddha, apparently the oldest in the area:

It was clear from the map that we could have wandered the mountain for hours finding more small carvings, but we headed back down to our bikes and rode onward. The road was just wide enough for one car, so we had some narrow passages of trucks and tractors, but very pastoral scenery, with chicken coops and cow barns and even a kennel of dogs. We eventually arrived at the foot of the mountain of Bulguksa – thank goodness for Google maps showing all the tiny roads! – and stopped in for bibimbap and pajeon before heading up to the temple.

The temple itself was lovely and quite different from Haiensa. Michael found it less impressive, but I loved the stonework in its facade and in the stone bridges leading up to the main courtyard. There were not too many tourists there, but we did see a couple in traditional hanbok clothing taking photos and three classrooms full of two- and three-year-olds in matching red pants whose instructors were valiantly attempting to keep in line. They were pretty adorable.

From Bulguksa we hiked uphill to see Seokguram grotto, described as a magical place in the mountains with carvings of Buddha and others in an impressive cave. I’d have to say this one, while lovely, was a bit of a disappointment after a 45-minute uphill hike, another $5 entrance fee (steep for Korea!), and the discovery that the entire site was one small artificial cave with glass covering the entry. That said, the carvings were in good condition, and if it hadn’t been so hazy we would have had quite a nice view.

We hiked back down and got on our bikes for the ride home, choosing to return by a different route toward Bomun Lake Resort. We decided to take our chances after seeing a sign that the road we wanted to take was closed 3km ahead – after all, a little backtracking is not a big deal on a bike – and only briefly questioned our judgment as the road wound up and up and up over a small hill. Turned out the road went through a giant construction site (new resort? amusement park? condos?) but was thankfully passable, so we didn’t have to turn around and go back up the hill we’d come over. And at the far end we got to see the crazily overbuilt Bomun Lake resort, an artificial lake surrounded by Korea’s first inverted roller coaster, a four-season indoor/outdoor waterpark, a giant recreation of a nine-story pagoda, a huge semispherical observatory, architecturally interesting convention centers and aviaries, and much more. Apparently the central fountain is the tallest in Korea too. Quite a sight – and quite a contrast from the old town of Gyeongju with its central royal tombs.

As we biked along the river into the sunset, we arrived back in town just as it got dark. 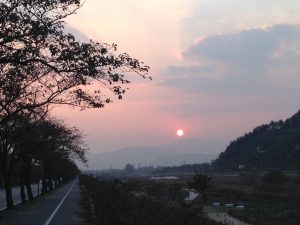 Having had our two favorite foods for lunch – bibimbap and pajeon – we ended up going for a Korean interpretation of Italian food for dinner, and had a really tasty meal that won my award for exceeding expectations by the greatest margin, with a seafood spaghetti in a tomato bacon cream sauce … yum! 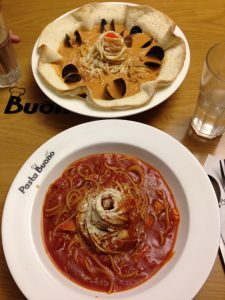 I guess I really do like Italian food, though I’m pretty excited for a few more days of delicious Korean meals before we take the ferry to Fukuoka on Sunday.

Hope you’re all well – would love to hear from you! Or have you join us on our adventures … 🙂