After a day of relaxing in Cluj-Napoca, doing laundry and admiring the interesting architecture, we set out for our six-day Romanian bicycle adventure. Here’s a map to give you an idea of where we are and where we’re headed: 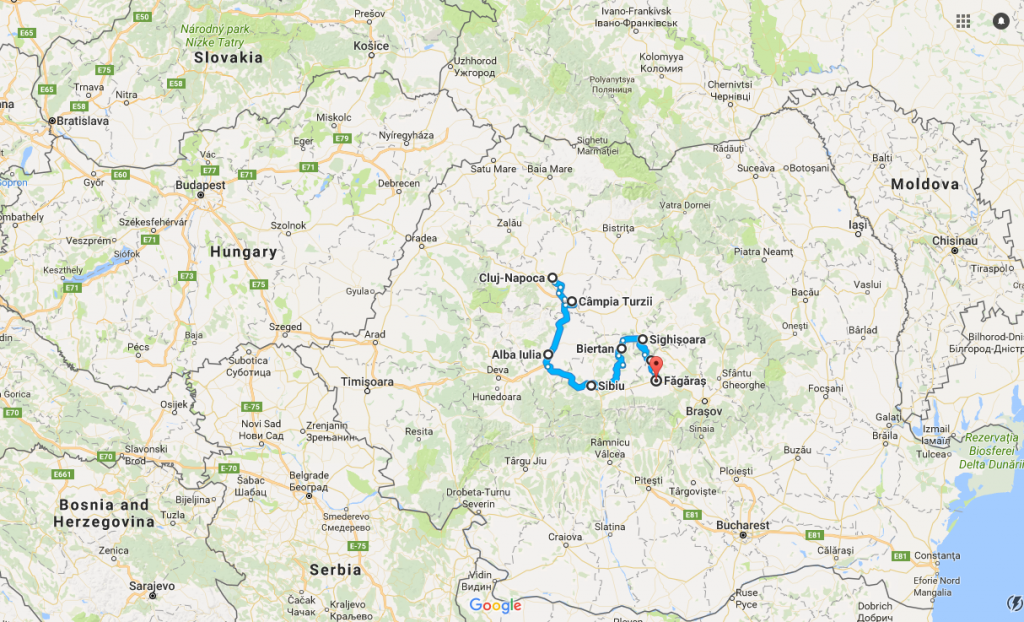 Today’s ride was a short one, just 55km from Cluj-Napoca to the small town of Campia Turzii, but it turned out to be tremendously varied.

The first ten or fifteen miles out of town took us up into the hills surrounding Cluj, then along rolling country roads through beautiful villages teeming with plum and pear trees and elderly women in scarves and skirts collecting fallen fruits from where they had landed overnight. We had a lovely view down over a few small towns to some distant mountains, and very few cars were to be seen. 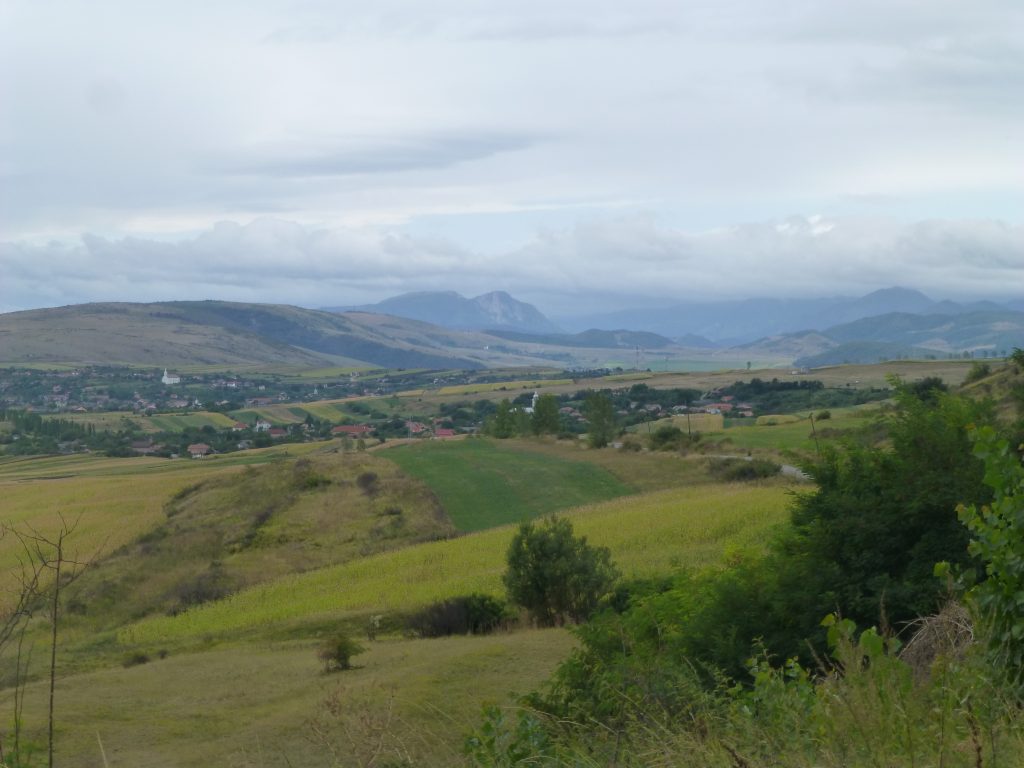 That blissful ride soon came to an end as we merged onto a four-lane highway, which we’d thought wouldn’t have too much traffic because of the nearby autoroute, and figured would likely have a shoulder. Wrong on both counts – we biked miserably up over a small hill as trucks and buses hurtled by us too close for comfort. We pulled over at our first chance, a small truck stop, and took a breath. Desperate for any option that didn’t involve getting back on the narrow shoulder and hoping to live, I explored a small farm road that seemed to lead the direction we were headed. It seemed to be still in use, and from Google Maps’ satellite view it appeared to probably lead into the next small town, paralleling the dreaded highway.

So we set off on the narrow dirt farm track, up over the crest of a small hill and into the valley below. We walked our bikes and as we headed down the hill they became increasingly encrusted in the stickiest mud I’ve ever encountered. At one point Michael’s tires seemed to pull the entire hillside onto his back wheel, with a clod of mud the size of a fist gathering on his back brakes. But anything was preferable to the freeway at this point, and we continued on down the hill into town as it started to drizzle. We celebrated when the road turned a corner to meet a paved road (huzzah!) but then spent half an hour slowly scraping the accumulated inch-thick mud off our bikes and shoes in the rain. Ah, lovely.

But the rain soon faded, and we took a short detour into Cheile Turenilor, a gorge cut through limestone and karst with spectacular rock formations on either side of the narrow valley. The road was dirt but had enough rocks in it to keep from sticking to us; we’re really learning to differentiate between all qualities of biking surfaces! 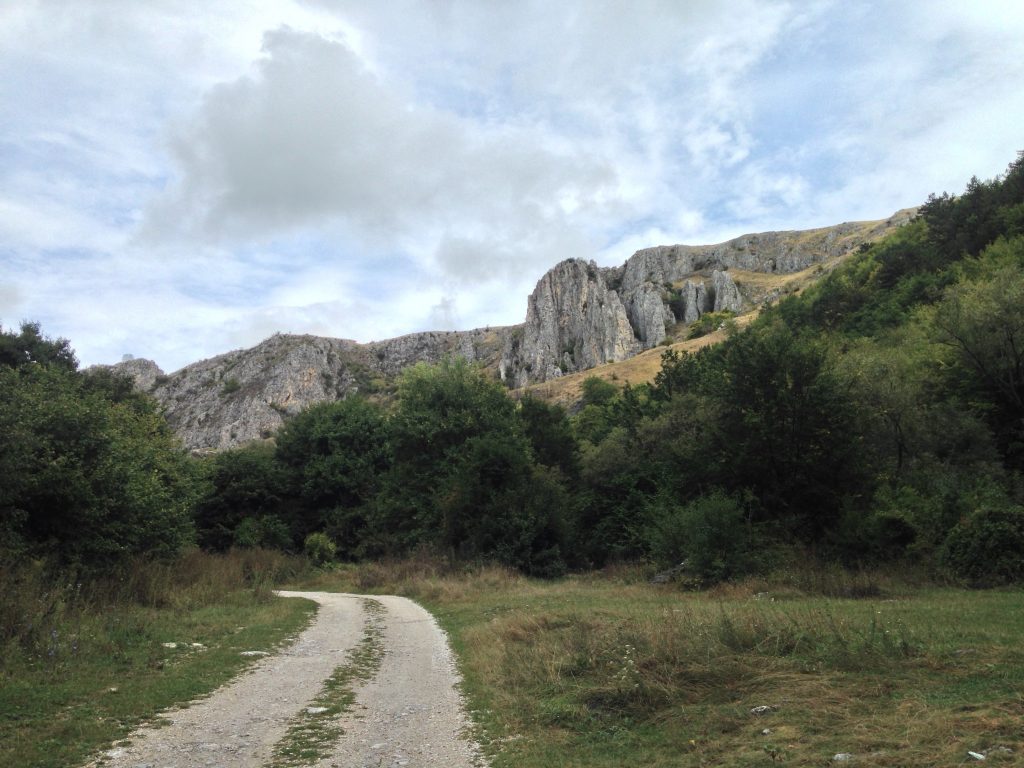 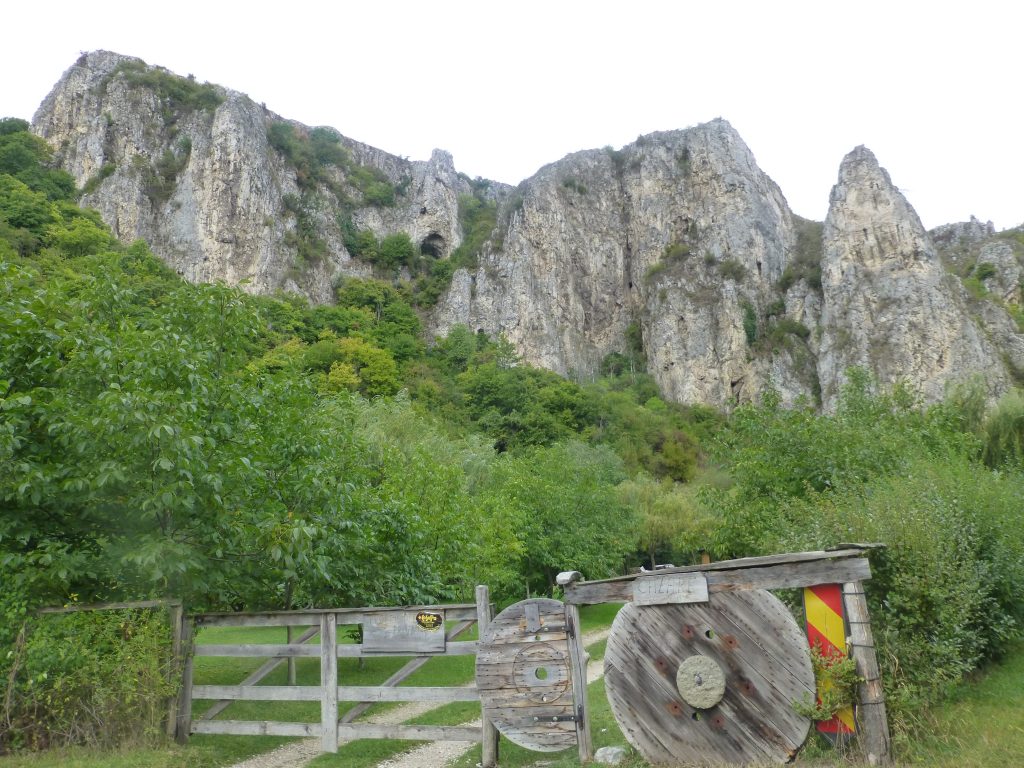 From the gorge we avoided the highway on side roads – mostly dirt, some mud, some rocks – to the salt mine of Turda, in continuous use from the Middle Ages to the early 20th century and now converted into a tourist destination complete with Ferris wheel, boating lake, minigolf, and bowling — all underground. Ridiculousness of this setup aside, the mine was beautiful and fascinating, with rippled patterns of salt on the walls and some of the original machinery used to extract salt and transport mined salt to the surface. We spent an hour wandering through kilometer-long tunnels and climbing down hundred-foot-tall staircases to explore various cavities in the mine, marveling at its scale and at the salt coating that everything left in there long enough seemed to acquire.

And then we made for Campia Turzii, a town with no particular claim to fame but with a comfortable and inexpensive pension from which I’m writing. For our first day of biking after a two-day hiatus, it was not too bad! Our muscles remain intact and our energy levels high. We’ll see about tomorrow …