Today we headed out for another 30-mile day trip and woke up pleasantly to cloudy but calm skies.  We got off to a late start due to tossing and turning all night (is this how it will be for four years?), but we had time to watch surfers and climb hills (that sign says ‘sea caves’?) and hike a bit. 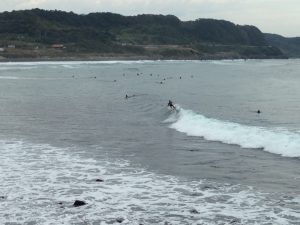 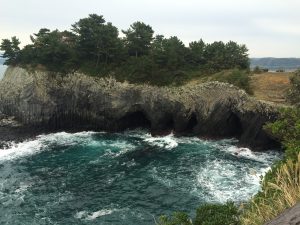 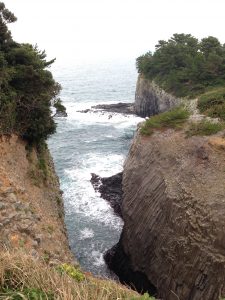 We continued on, wandering quiet, hilly coastal roads until we hit Yobuko.  This picturesque town is known for its morning market (which we missed), but also turns out some great seafood.  We stumbled upon our best Japan meal just picking out the set lunch in the window of the first restaurant we saw.  It looked like sushi on rice with tempura, and it was.  But the bonus was that most of the 12 tempura pieces was squid (fried calamari!) and octopus, and the fish was delicious.  And a bonus raw quail egg, miso soup, salad, and dessert.  Not bad for $10. 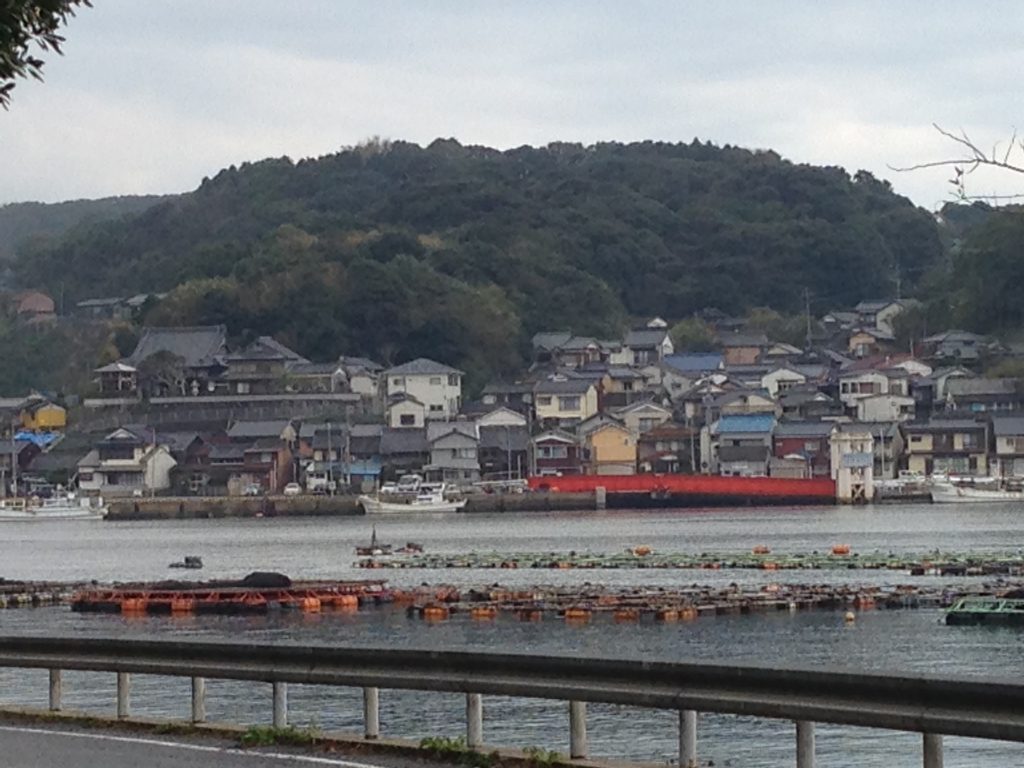 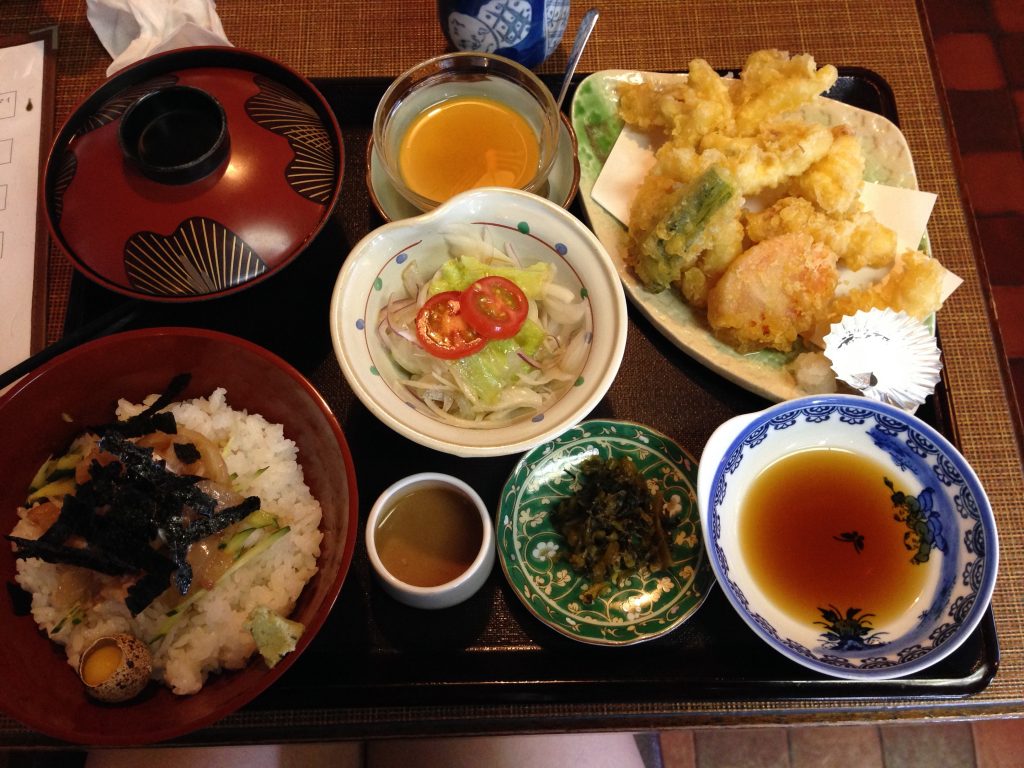 We jumped in to lunch just as the forecast rain arrived, but it didn’t look bad to start.  The forecast said only 2mm an hour, which is a drizzle, and we could bike through that.  So we stopped at the gigantic ruins of Nagoya Castle tried to interpret lots of maps (with no English) about the Japanese invasion of Korea in 1592 (staged at this castle), and took in the impressive sightlines the emperor must have had. 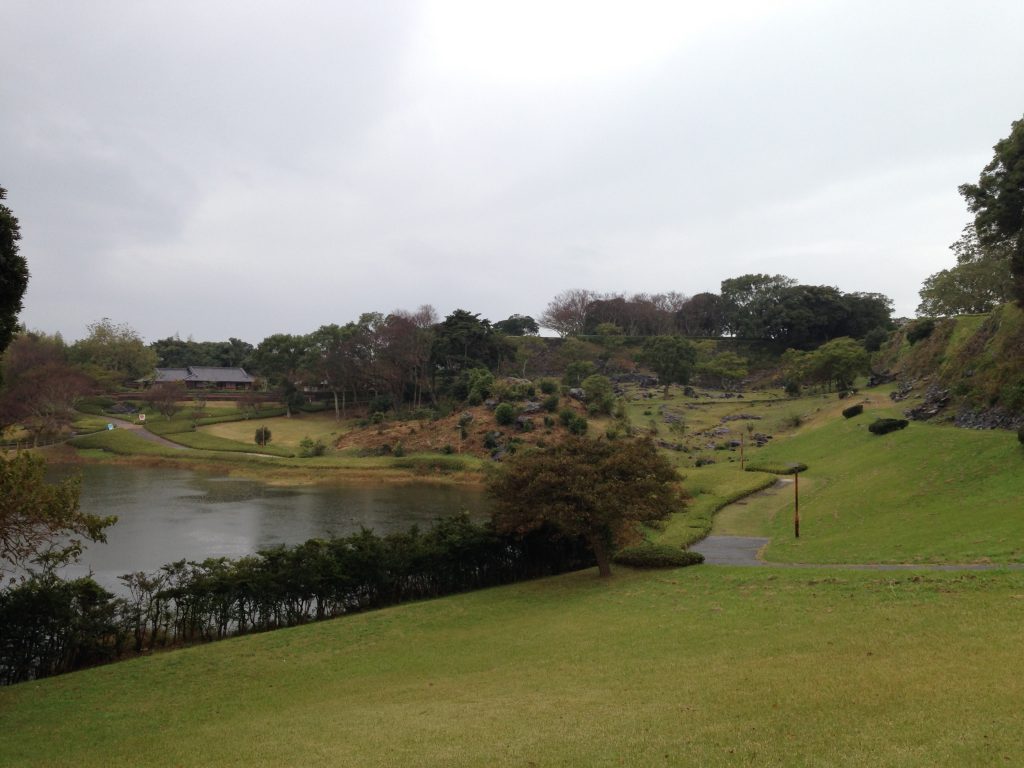 From the castle we continued around the Genkai peninsula (Japan is a fractal set of islands and peninsulas–if you tried to bike every nook and cranny it would take a lifetime) and the rain started.  No problem, we thought, we’re in rain jackets, rain pants (check out Andrea’s stylish $1 digs), and waterproof shoes.  But as we went up and down and up and down the hills, the rain just kept coming.  It pelted us as we flew down the downhills and froze us as we rode slowly uphill.  But we had a destination to reach, and only an hour til sunset. 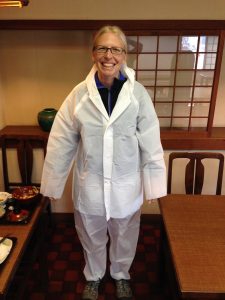 Finally, we reached a scenic viewpoint (just past the nuclear powerplant and before the huge community center) and paused and just laughed.  Not one inch was dry, our phones wouldn’t work for all the moisture, and the rain just kept coming harder and harder.  As Andrea continued her bobbing duck routine (to shake the rain from her helmet before it dripped in her face), we decided to pause our route and figure out options.  There had to be another way home. 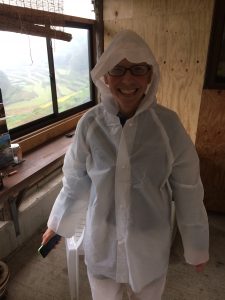 Fortunately, our guess was right, there was a bus, from across the street where we stopped.  So we locked our bikes to a railing (hopefully they’ll be there tomorrow, tune in to find out), and waited 15 minutes in soaking rain for a bus to pull up.  We tried to pay and everyone looked confused, until we remembered that Japanese buses pay as you get off.  So we took a half hour journey on a bus with 20 dry high school students and 2 soaking wet foreigners and no one else.  Turned out it was lucky we didn’t try to bike the road, as it was winding, narrow, hairpin turns the whole way.  We would have survived, but we would have caused a 2-mile traffic jam as polite Japanese drivers waited to pass us, and we would have been terrified the whole time.  We will not take that route home.

We got a ham, egg, cheese, meat, and bbq sauce burger from Karatsu burger (famous, it turns out) (3rd best meal of the trip, making this both the yummiest and wettest day on record), ate it immediately, and set out for our hotel, a 1.5 mile walk.  We were wet enough already, what was a little more rain?

Main lesson: you’ll have plenty of time to dry out, eventually.