Well, yesterday wasn’t the best day for us, but I have to say that if it turns out to be the worst day of our bike trip we will have been incredibly lucky.

After crossing into Slovakia on our first day of biking, we headed deeper into Slovak territory from the town of Kezmarok to Hrabusice via Spis Castle. Doesn’t that make it seem like Spis Castle is on the way? No such luck.

The day started out with a later start than we’d planned; Michael hadn’t slept well and so we got out the door at 10:15 instead of 8. With 6 hours of biking ahead of us, that made for a long day, but we figured we could fit everything in. Our road out of town was lovely, a quiet back road where we passed ten cyclists and maybe two cars, and we turned onto another back road marked as a cycleway that slowly climbed up into the hills above Kezmarok, with sights like a herd of cows and the site of an abandoned Russian village that had existed from the 1200s until 1952. It was perfect – gentle enough of a grade that we could easily bike up the 8km to the top of the hill. Until we got near the top and the nice pavement disintegrated into a crumbling strip of asphalt surrounded by small rocks, and stayed that way for the next 10km. Descending the hill was a challenge – my hands are too small to hold onto the brakes all the time! – but we made it down into the valley in one piece and said, phew, well, glad we survived that.

Our first stop was in the UNESCO-listed town of Levoča, where a beautiful church and town hall form the center of a walled town on a hill. We biked around the central area, chatting briefly with two Danish retirees who were very interested in our folding bicycles and taking photos, then had a picnic lunch on the square. Michael had brought a beer with him! 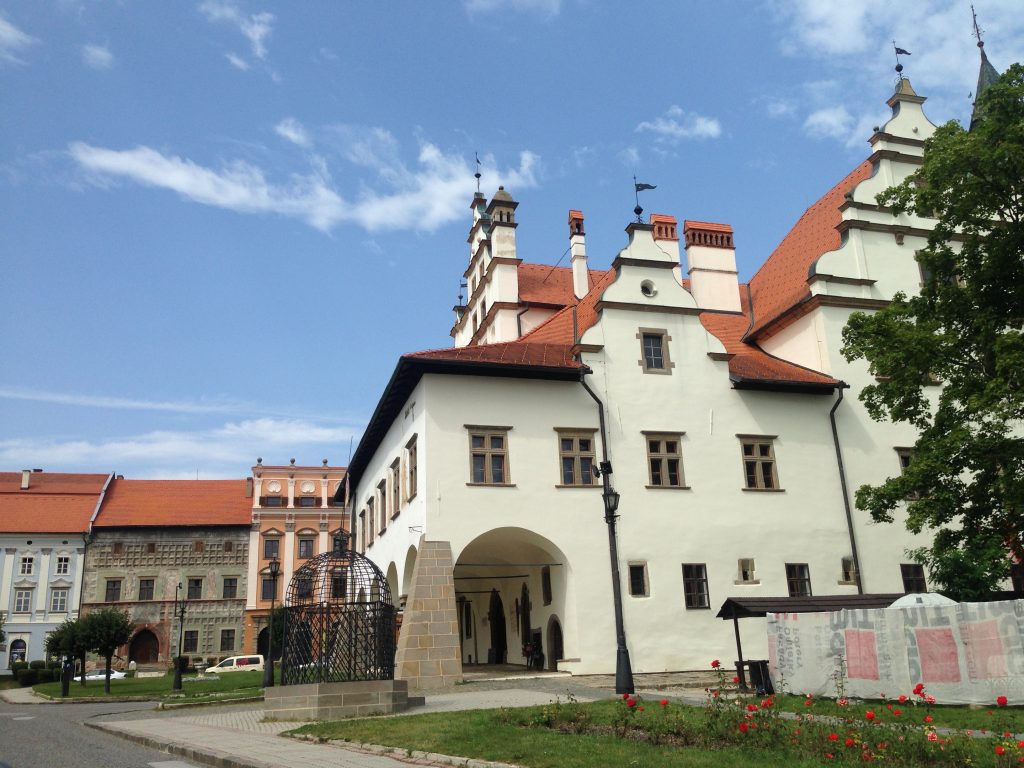 We’d had good luck on bike routes so far, so we weren’t too worried when we headed out of town. But soon our paved road turned into dirt …

… and then steep dirt we had to walk up … 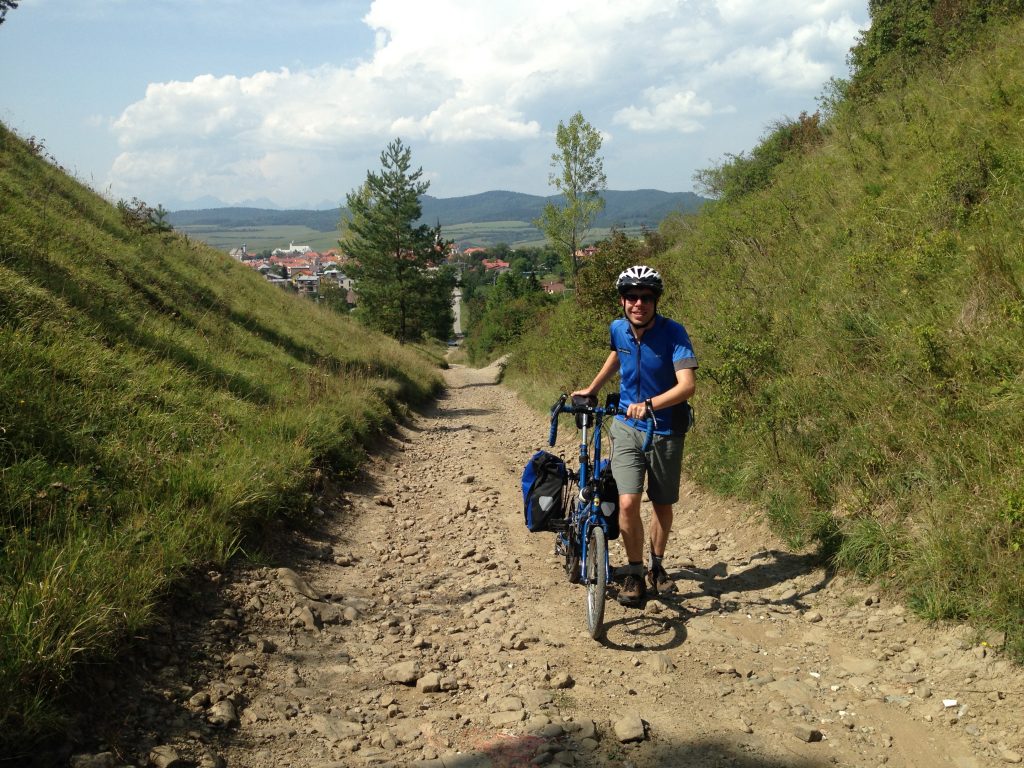 … and then it became just grass!

We soldiered on through the edge of a grass field, which clearly was still traveled every so often by hapless bikers like us who were following an old map. Eventually the route came out at a paved road that went underneath the freeway. I glided down and up the other side, only to turn back and find that Michael was not behind me, still not behind me, still not there. With visions of bicycle accidents in my head, I turned back to find Michael walking toward me completely intact, but with a flat tire on his back wheel from all that cross-country riding. We settled into the shade of the overpass and changed our first flat tire. Not bad after several long weeks of riding, but still a drag on a day when we’d gotten a late start.

When our route turned back into dirt on the far side of the freeway, we gave up on our nice little side route and headed up to the main highway – not the freeway, but a state route alongside it, with a decent amount of traffic but also a good-sized shoulder. We soon turned off onto another small country road, this one mostly paved except for some hairy bits down a steep hill into Buglovce. The highlight, however, was that starting here we had crackerjack views of our destination, Spis Castle, the largest in Central Europe. What a castle! We rode closer and closer and got better and better views of its amazing construction. 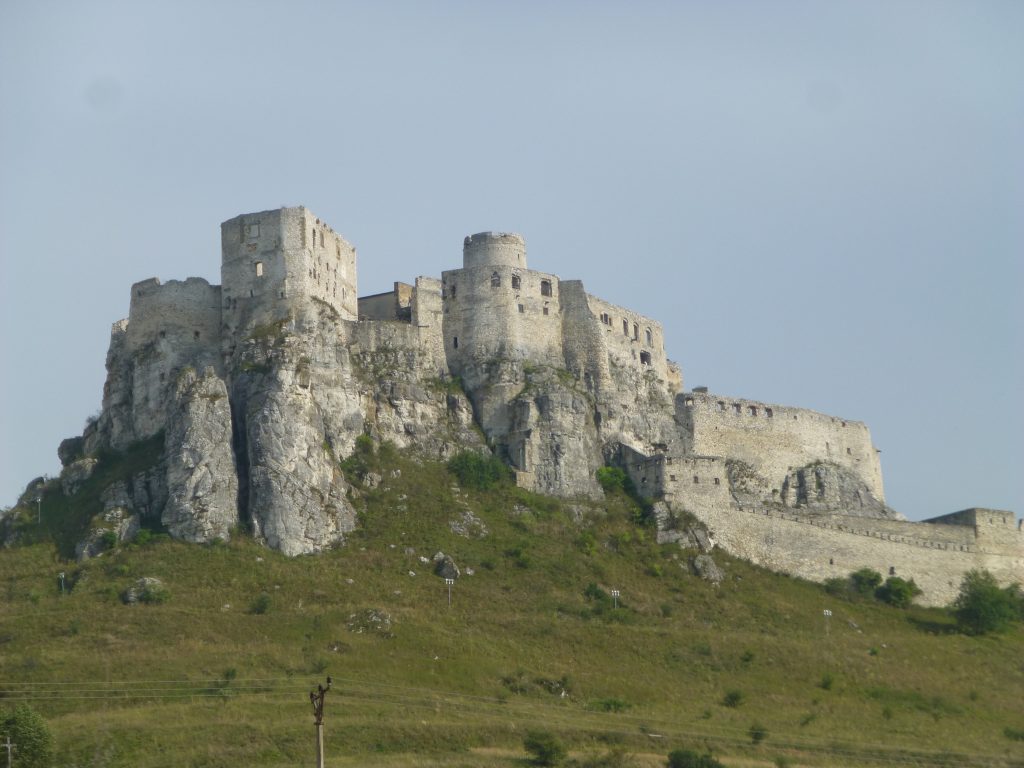 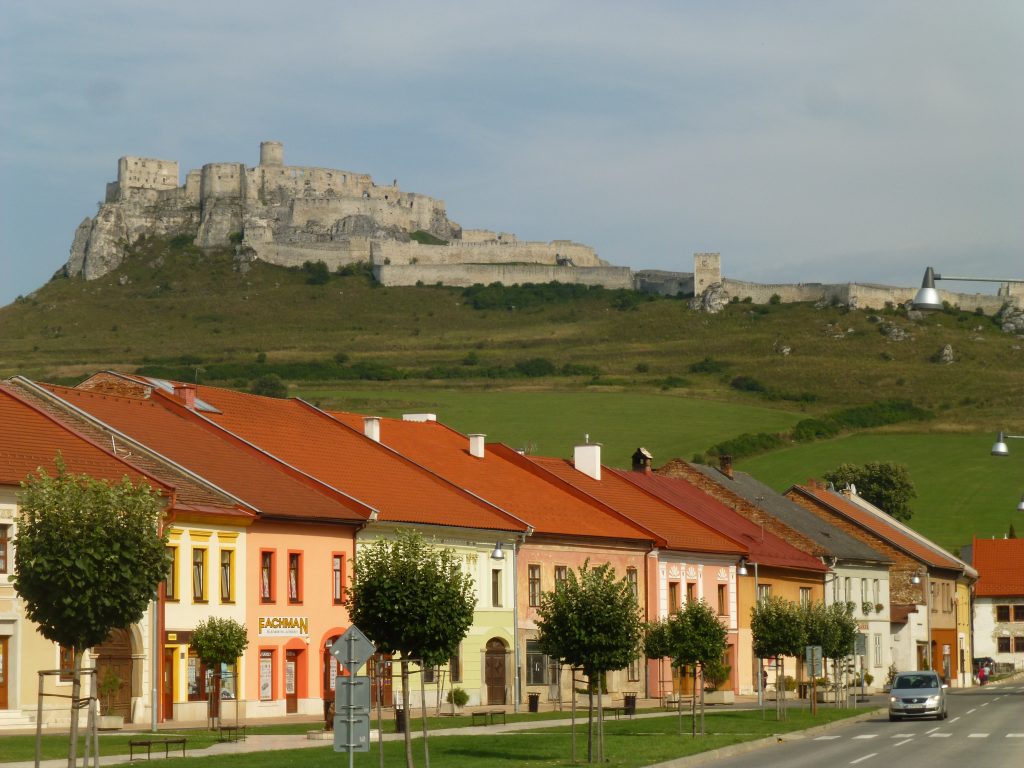 Sadly, it was almost 4pm and our ride to Hrabusice was another 2.5 hours, so we didn’t ride all the way up to the castle, and instead turned back after some great views of the castle perched on a hill. Our route back took us by a hugely popular “sheep dairy chalet” and then a set of mineral springs bubbling ferociously and smelling of sulfur, then along the main road and some side roads to another small town, where a friendly old man persistently tried to help us with our bike route despite the fact that we didn’t speak a word of Slovak. He soon roped a whole carful of retirees into pointing at the map with us, and we headed on down the road.

We took a variety of busy roads and back routes to Spisska Nova Ves, then a wonderfully labeled bike route that cut 10 miles of road down to 3 miles but which was paved with concrete blocks that made us go bump-bump-bump-bump down the road! By this time it was starting to get a bit dark, so we turned on our lights and just powered through it – and were actually relieved when the road turned to ungraded dirt instead of the concrete slabs! 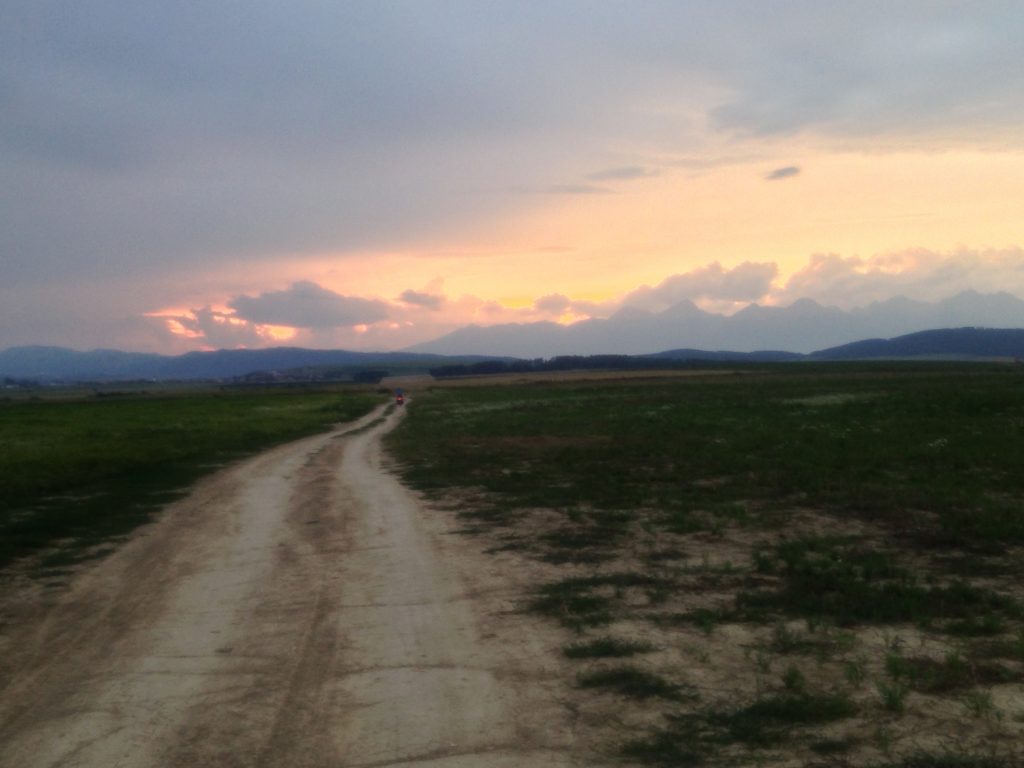 We arrived in Hrabusice just after sunset, having spent the last few miles wondering whether the town would have any restaurants or we’d have to survive on making a quesadilla from the tortillas, cheese, and salami left over from lunch. But joy! o joy! The hotel owners sent us to a nearby pizzeria, where we feasted on pizza with sheep cheese and smoked cheese and bacon and kielbasa and reveled in the fact that despite roads made of rocks and dirt and grass and concrete, flat tire and all, we’d made it! After dinner I collapsed straight into bed and slept for almost 10 hours.

1 thought on “Venturing into Slovakia”