We ended our biking in Onomichi, where we had our first noodle-based okonomiyaki (delicious and cheap at $4.50) and also bid farewell to our trusty bicycles. We would have loved to keep biking, but with only a few days left in Japan and a lot of transit in the next few weeks (Tokyo – Bangkok – Phuket – Melbourne – Brisbane – Sydney – NZ) it would be too much of a pain. But how best to leave the bicycles behind? It would be nice if someone could get some use out of them. So we found a couple who’d been looking at rental bicycles and offered them ours instead. We chatted for a bit – they’re Danish and bike around Copenhagen all the time – and exchanged contact info before handing over the bikes, locks, helmets, spare tubes and all. Thus down to a small backpack apiece, we boarded the train to Hiroshima, arriving in the evening and settling in for a night of laundry and guidebook reading. The next morning we walked around town, visiting the Choco cro and the castle, on the way to the memorial for the atomic bomb. One of the buildings directly under the blast is still standing and forms the centerpiece of a peace park dedicated to the victims and to preventing nuclear proliferation. The museum was quite moving, though the scale of destruction remains hard to grasp. A whole city flattened. 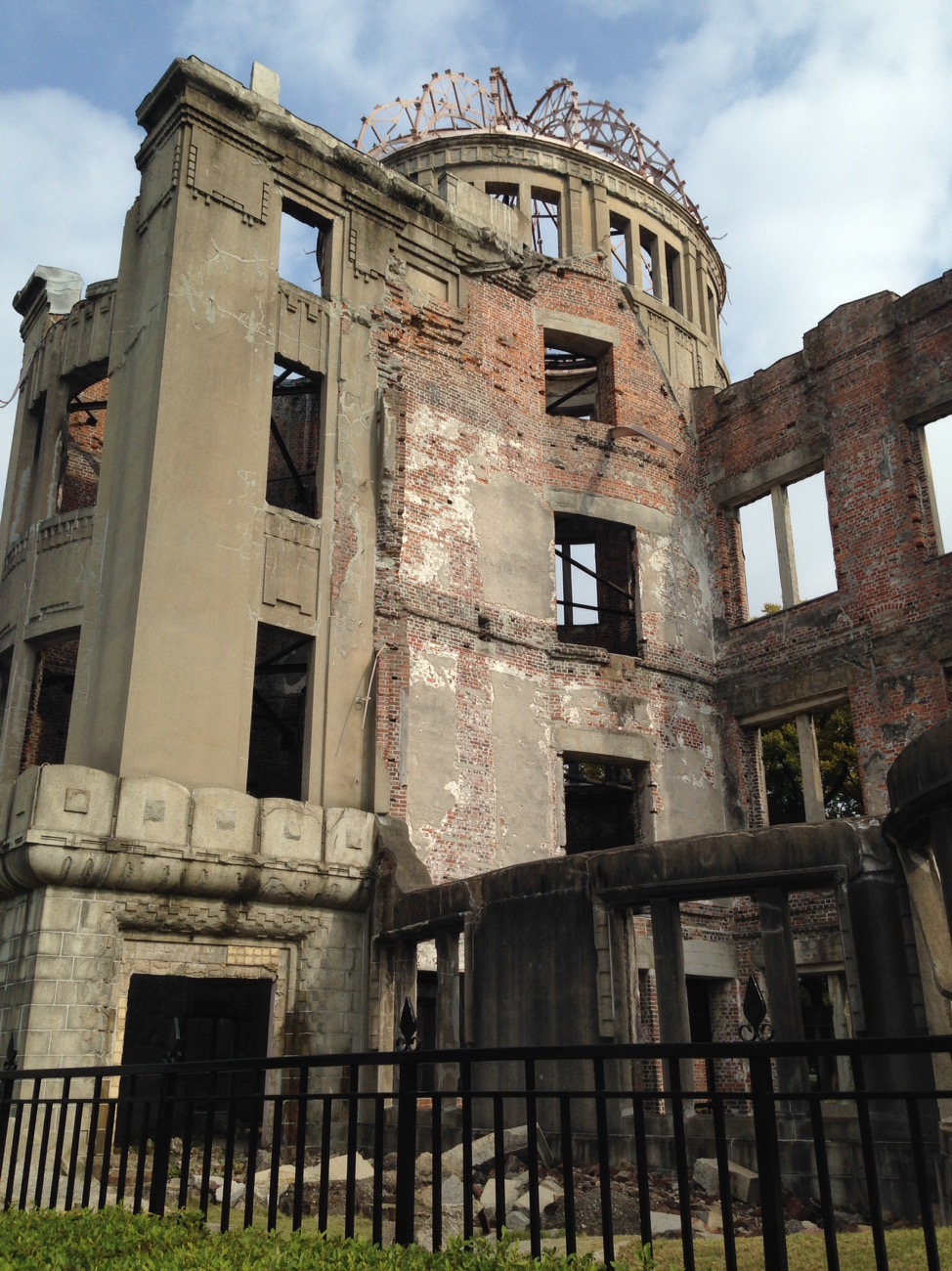 Somber, we nonetheless continued with our day: oyster tempura for lunch and the Shinkansen train to Himeji. Never heard of it? Neither had we until reading the guidebook last night, but it has one of the few original feudal castles in Japan, never attacked and not bombed in WWII. It also happens to be right on the train route from Hiroshima to Kyoto.

The castle was very impressive (so many steps to get to the top level! And so much more spacious than a European castle of that era, since wood is much lighter than stone!) and we wandered its grounds and a nearby garden until sunset before boarding the train to Kyoto. 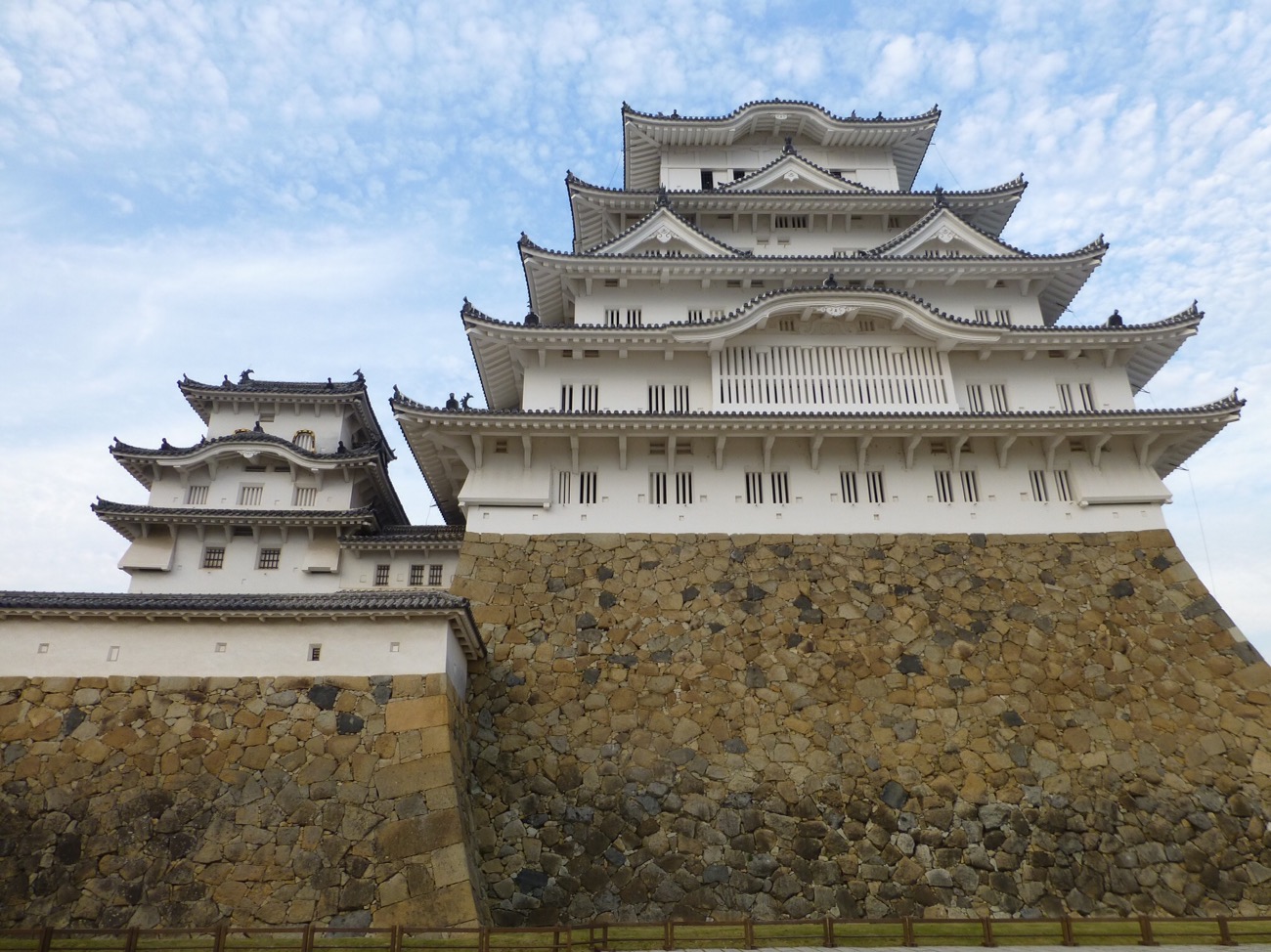 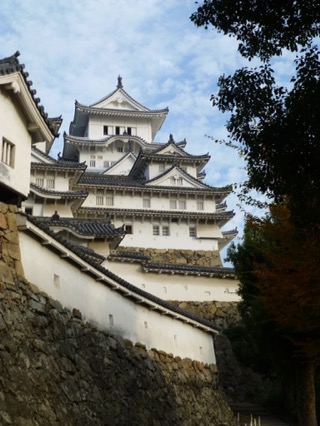 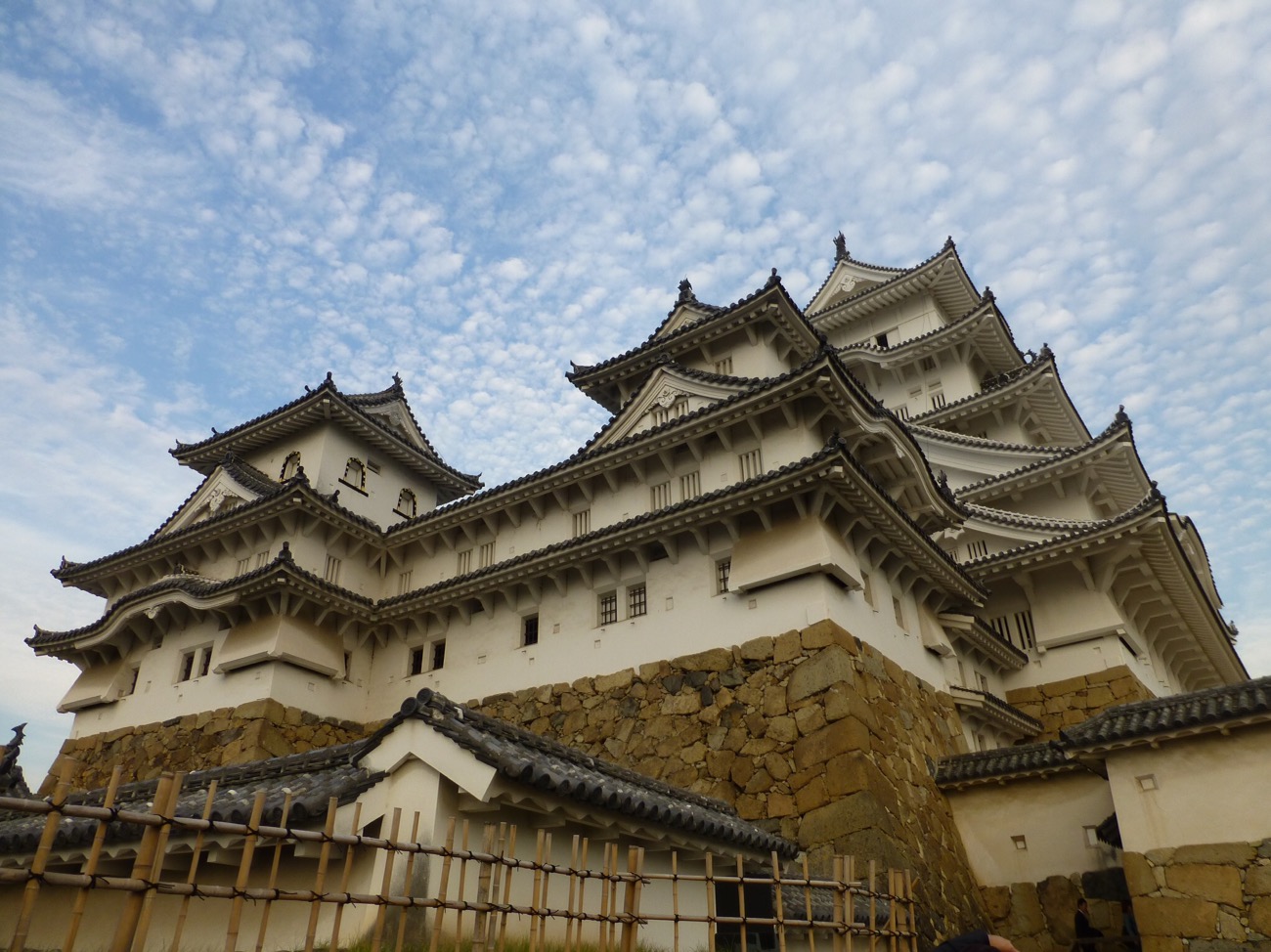 The gardens were set in the ancient samurai quarters: 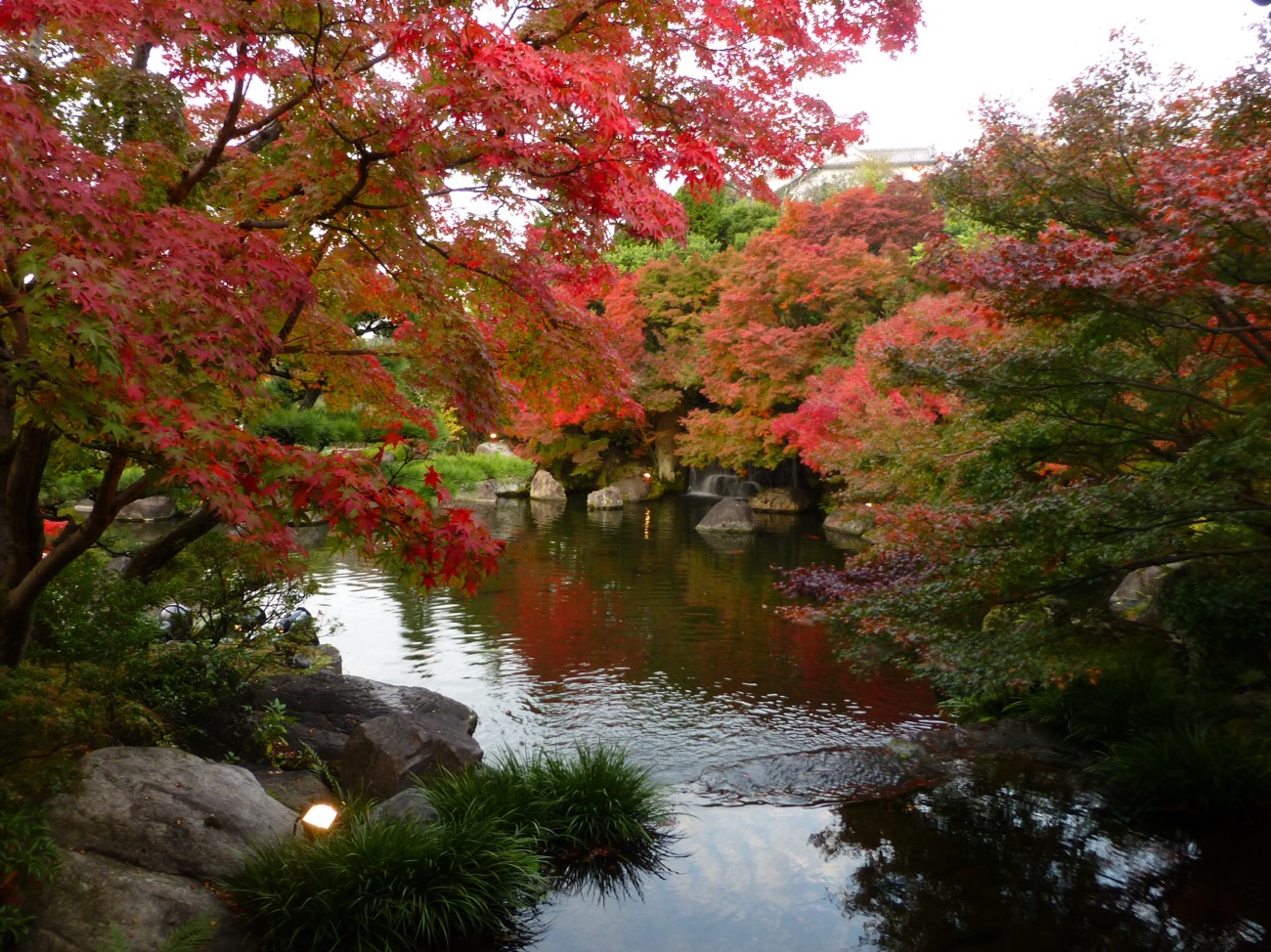 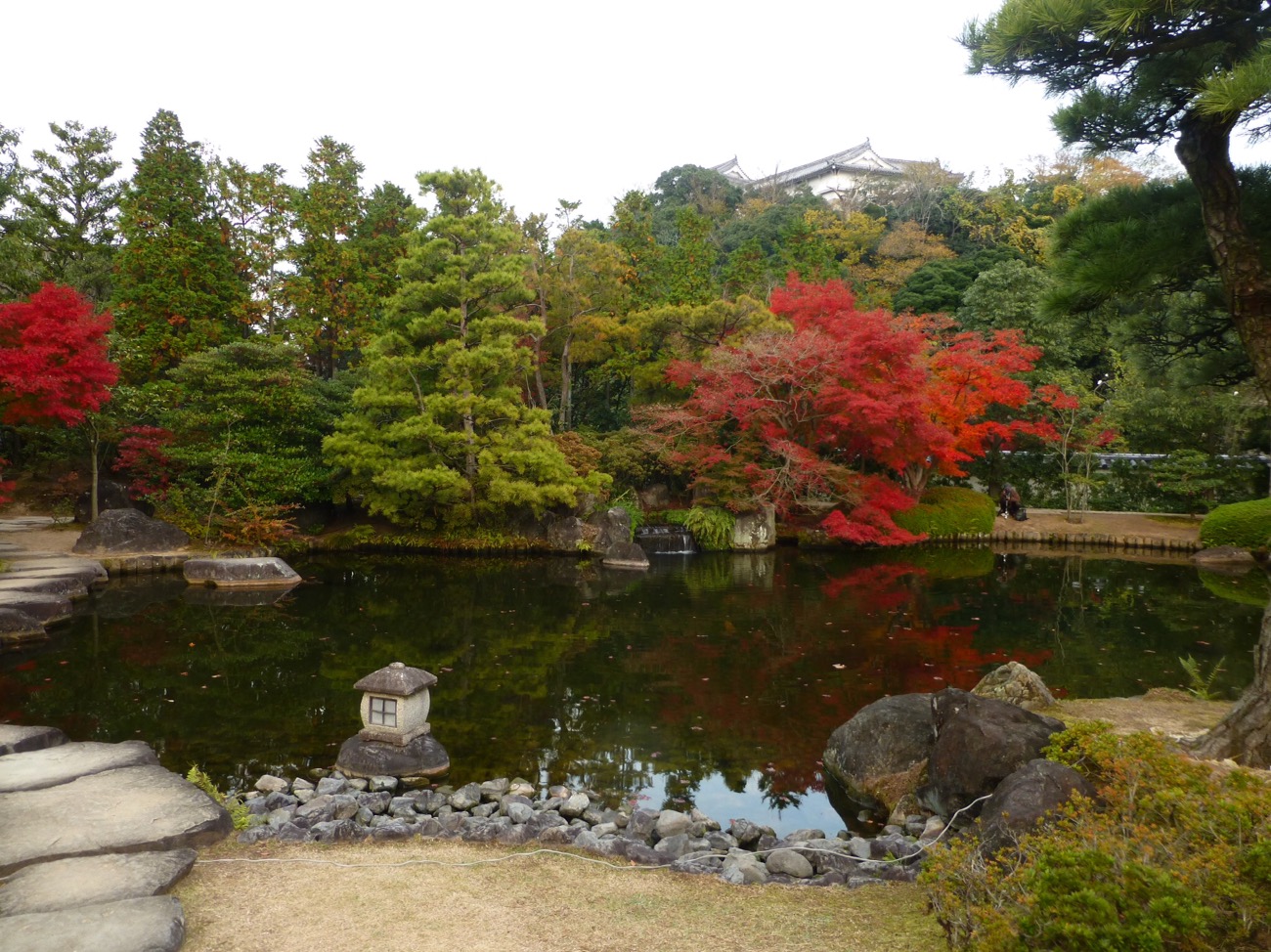 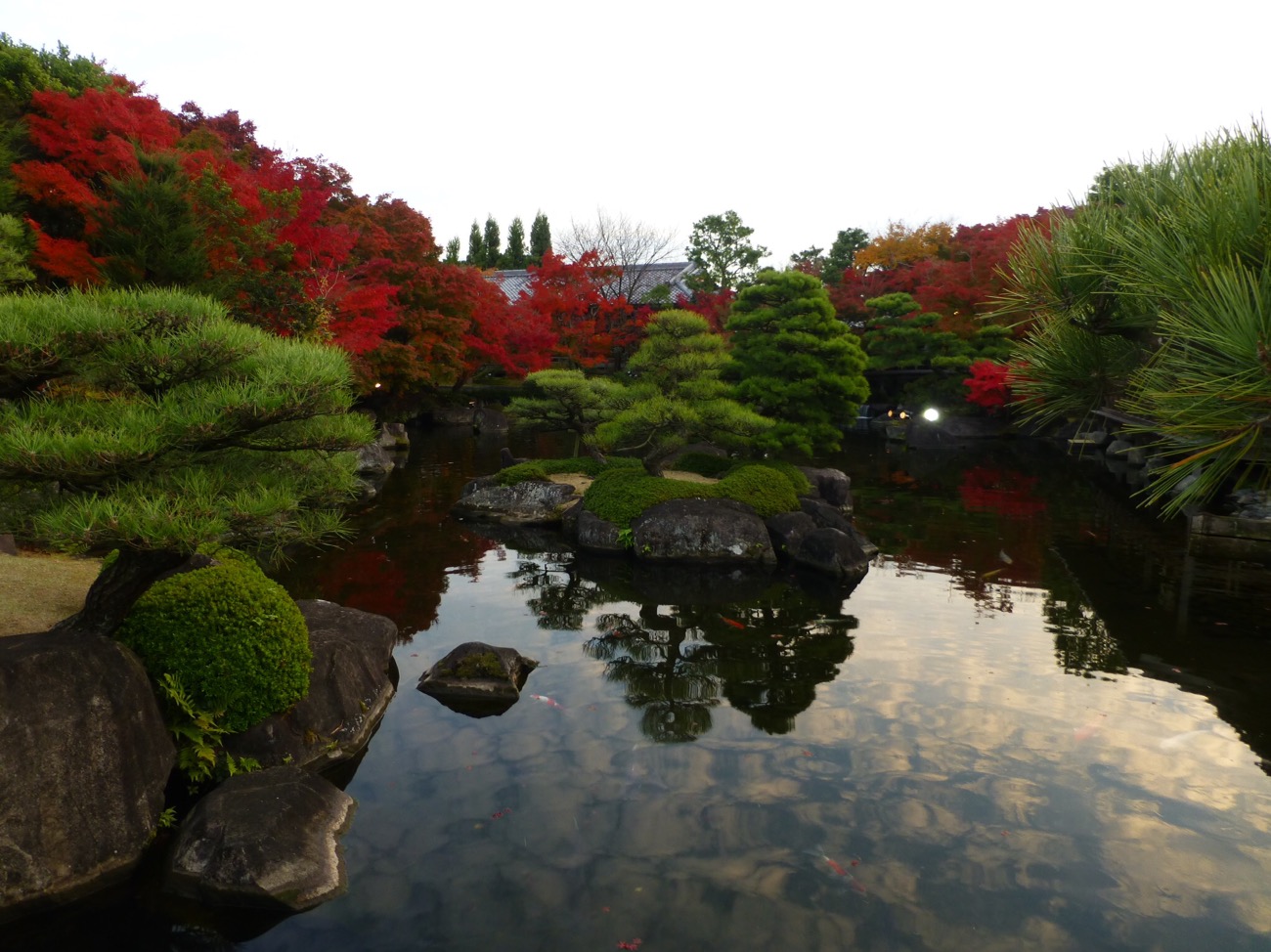 Our last three days in Japan were spent in Kyoto, the city everyone told us we couldn’t miss. Temples and shrines galore, 17 unesco world heritage sites – and every single Japanese tourist in the entire country, because the very weekend we had chosen turned out to be the height of fall foliage season. We still enjoyed wandering among temples, and even found many where the only other visitors were kimono-clad wedding guests. We thought we had tired of fall foliage season, having more or less followed it south for the last seven weeks, but we were still awed by the deep crimsons and bright yellows of the lovely fall leaves. 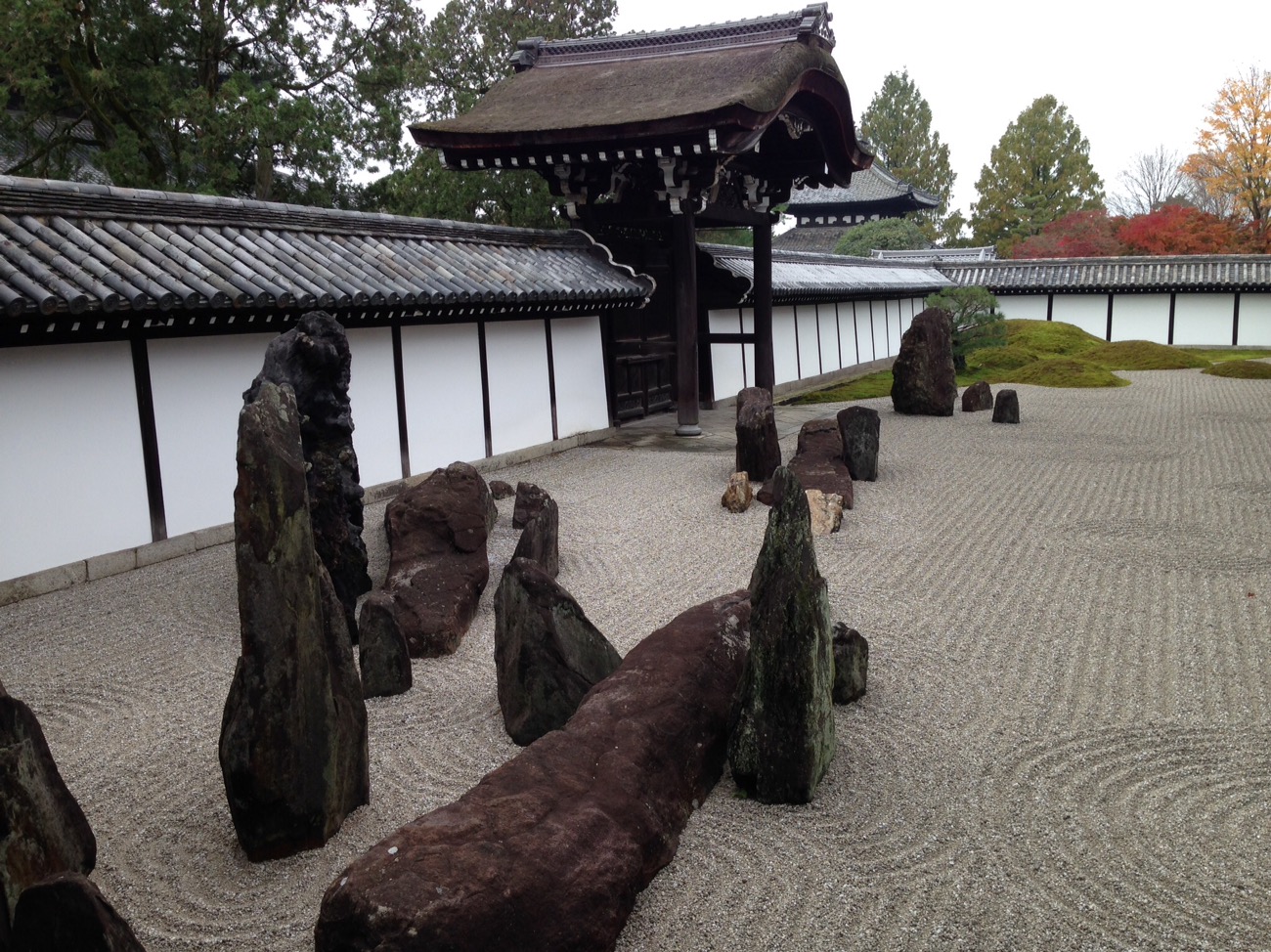 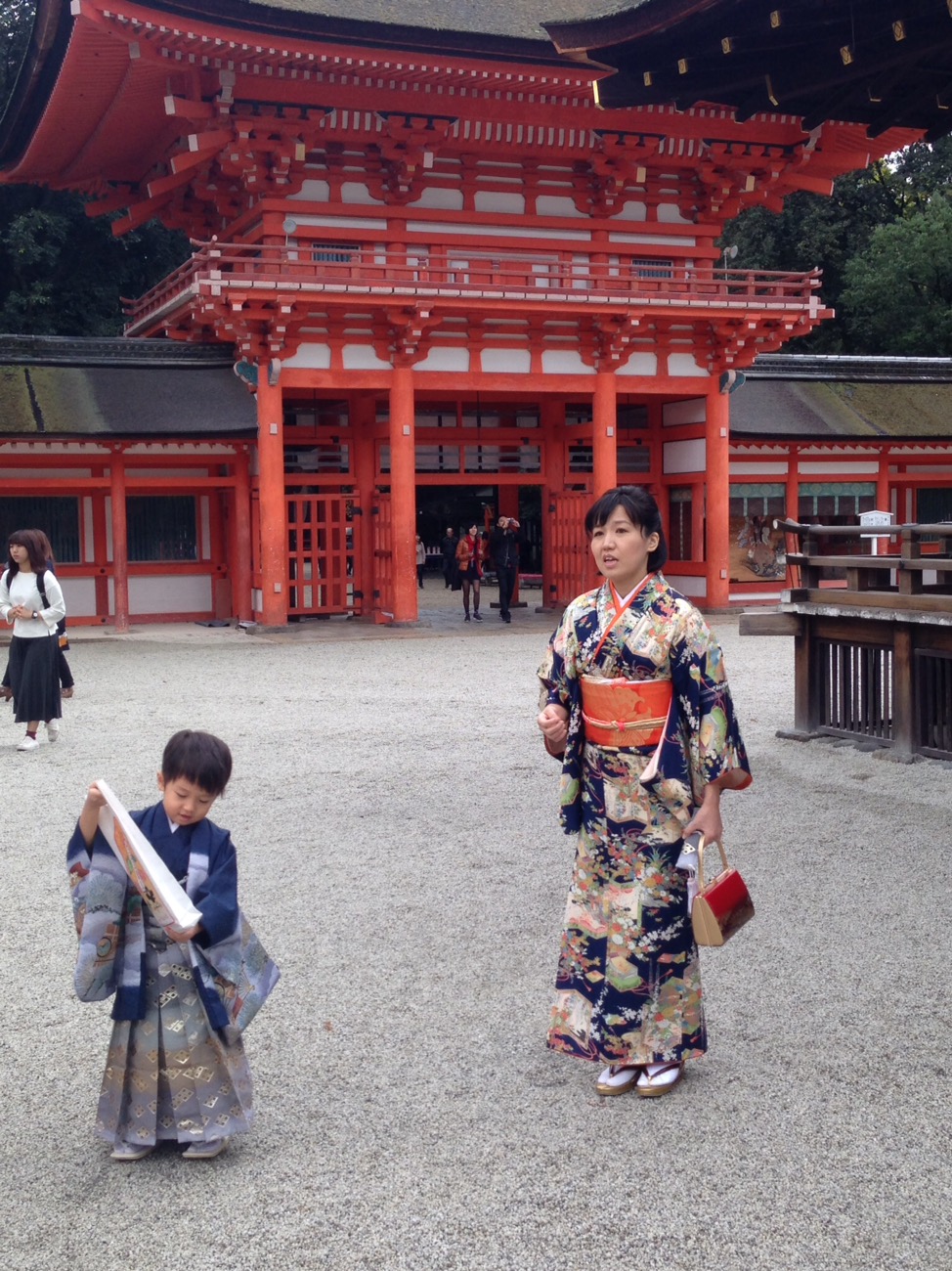 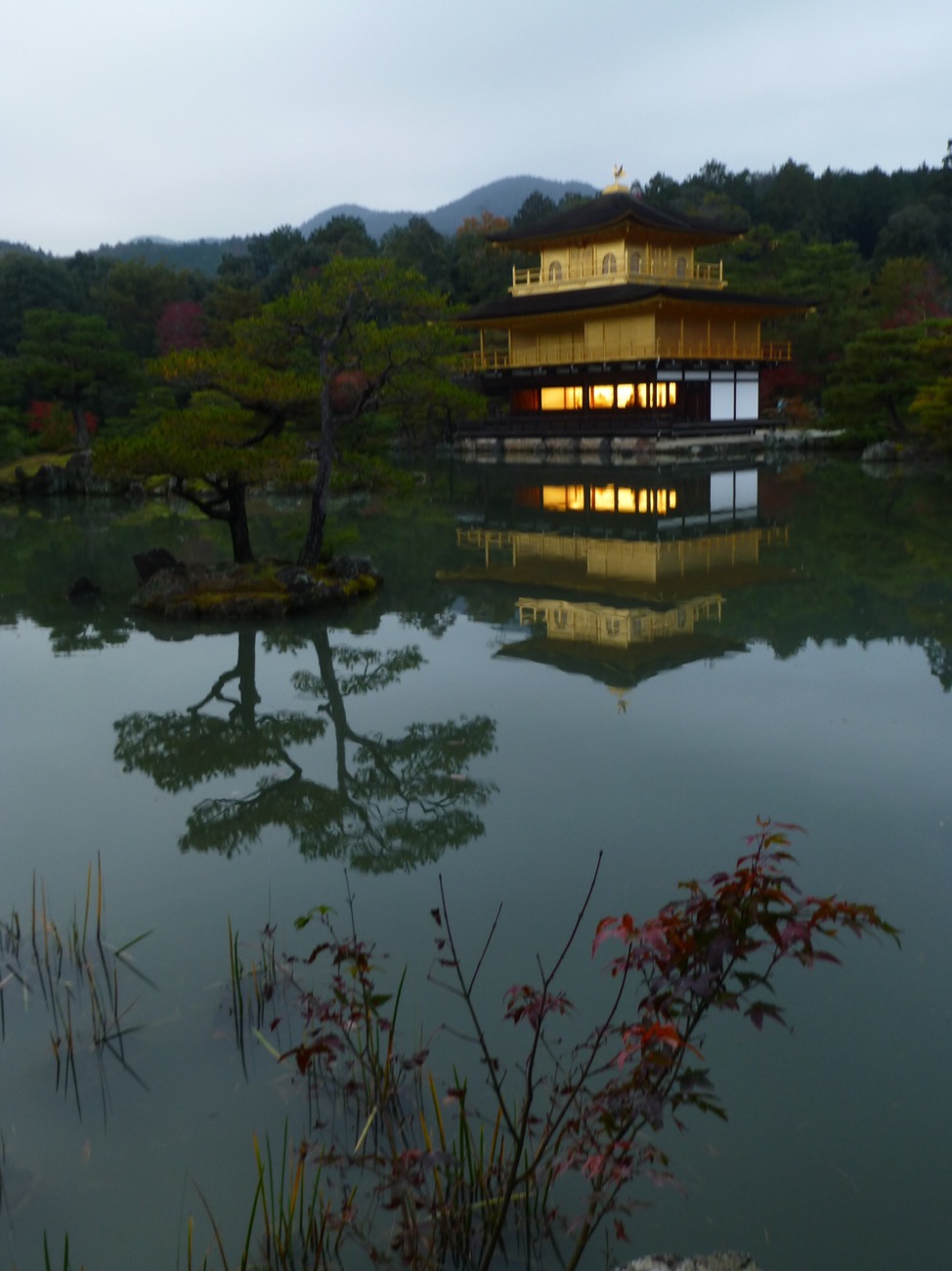 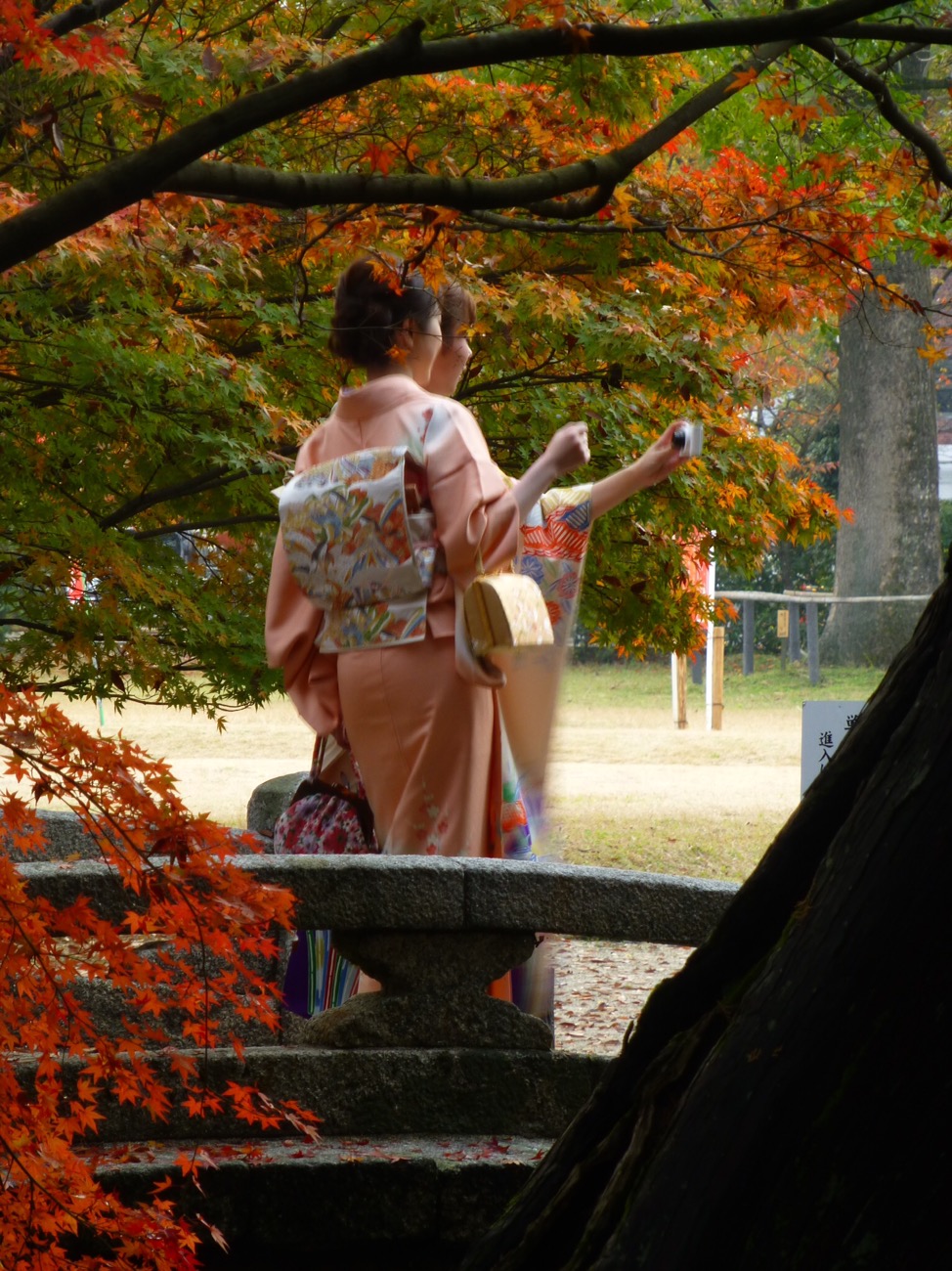 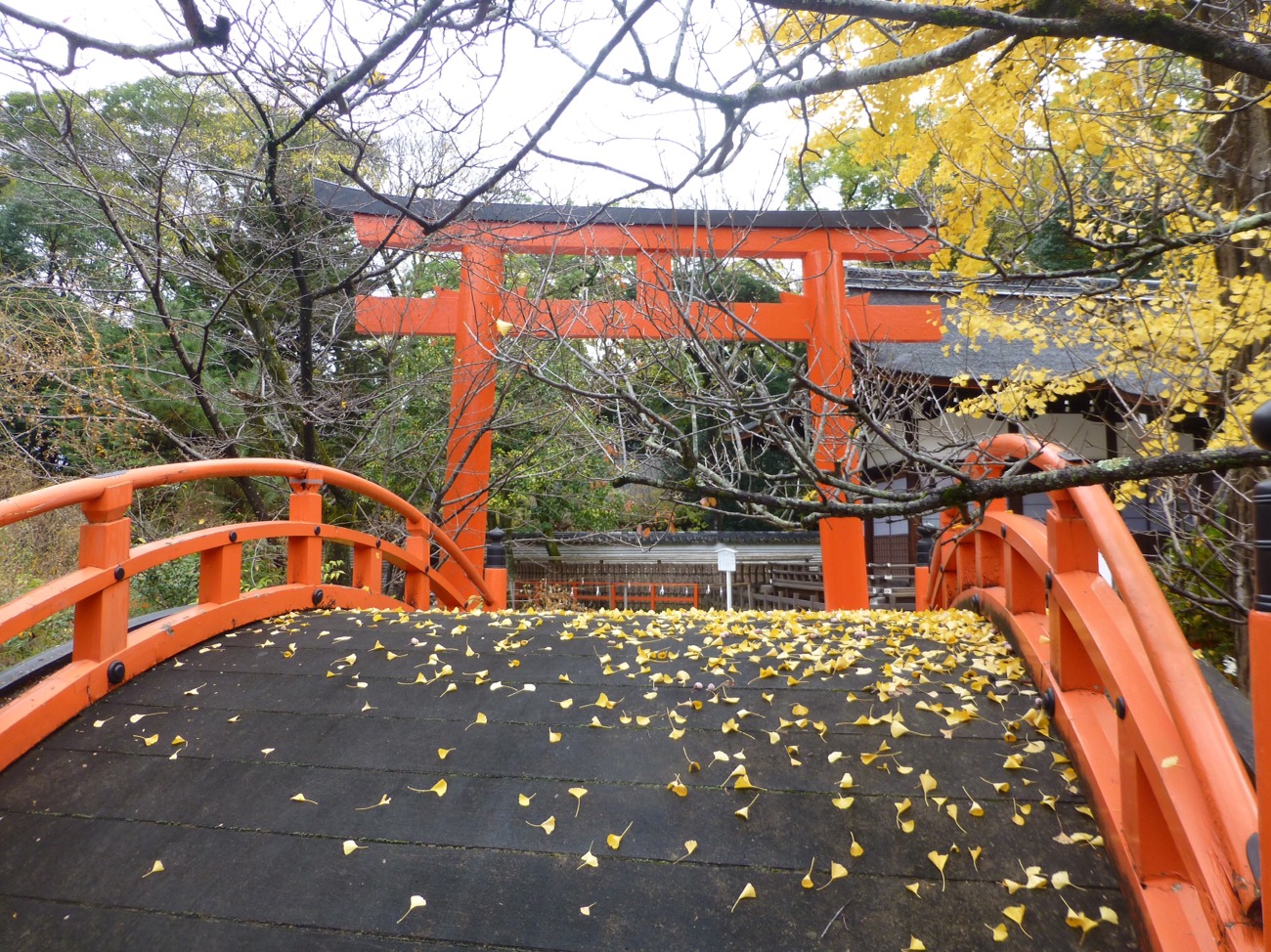 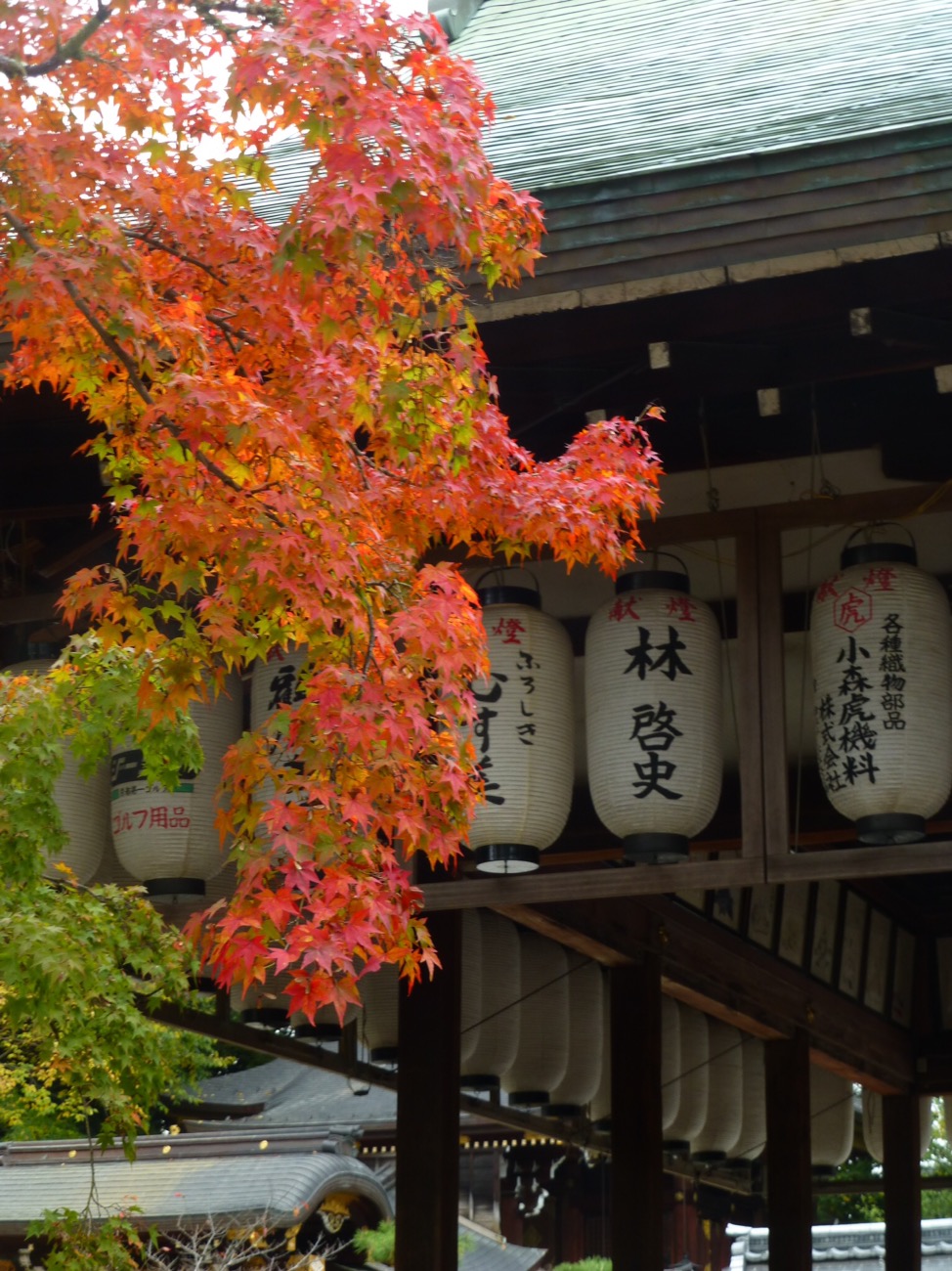 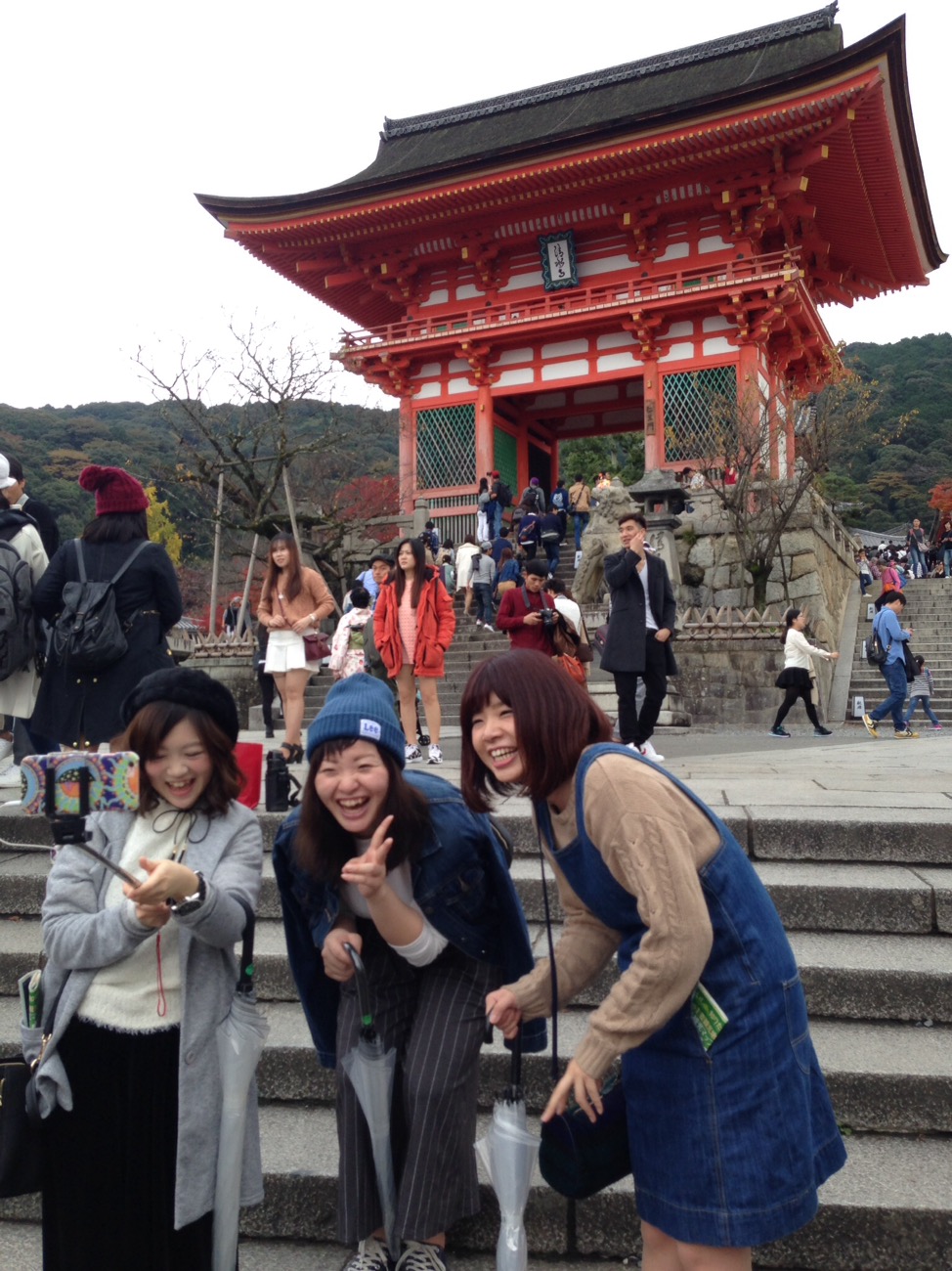 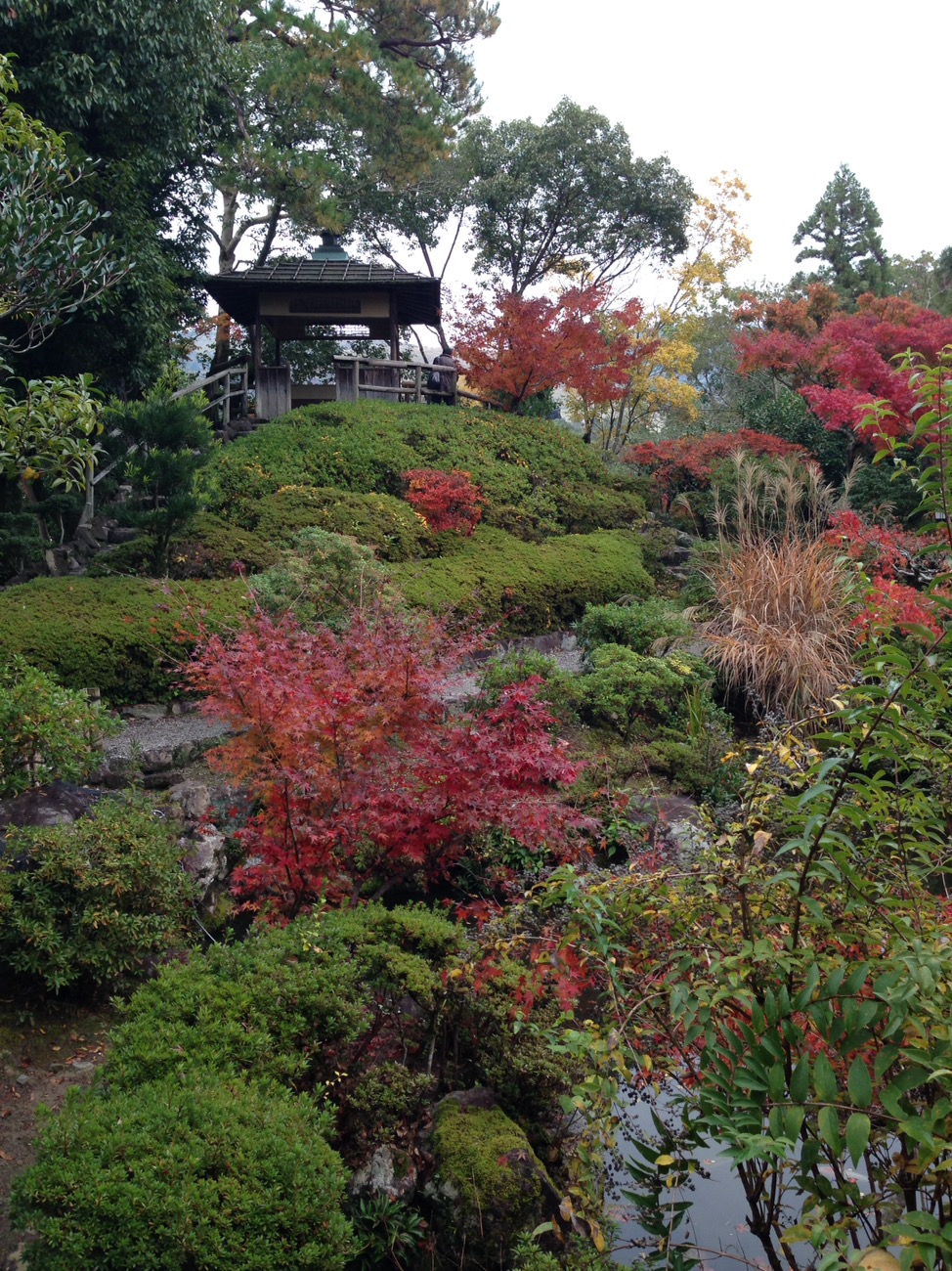 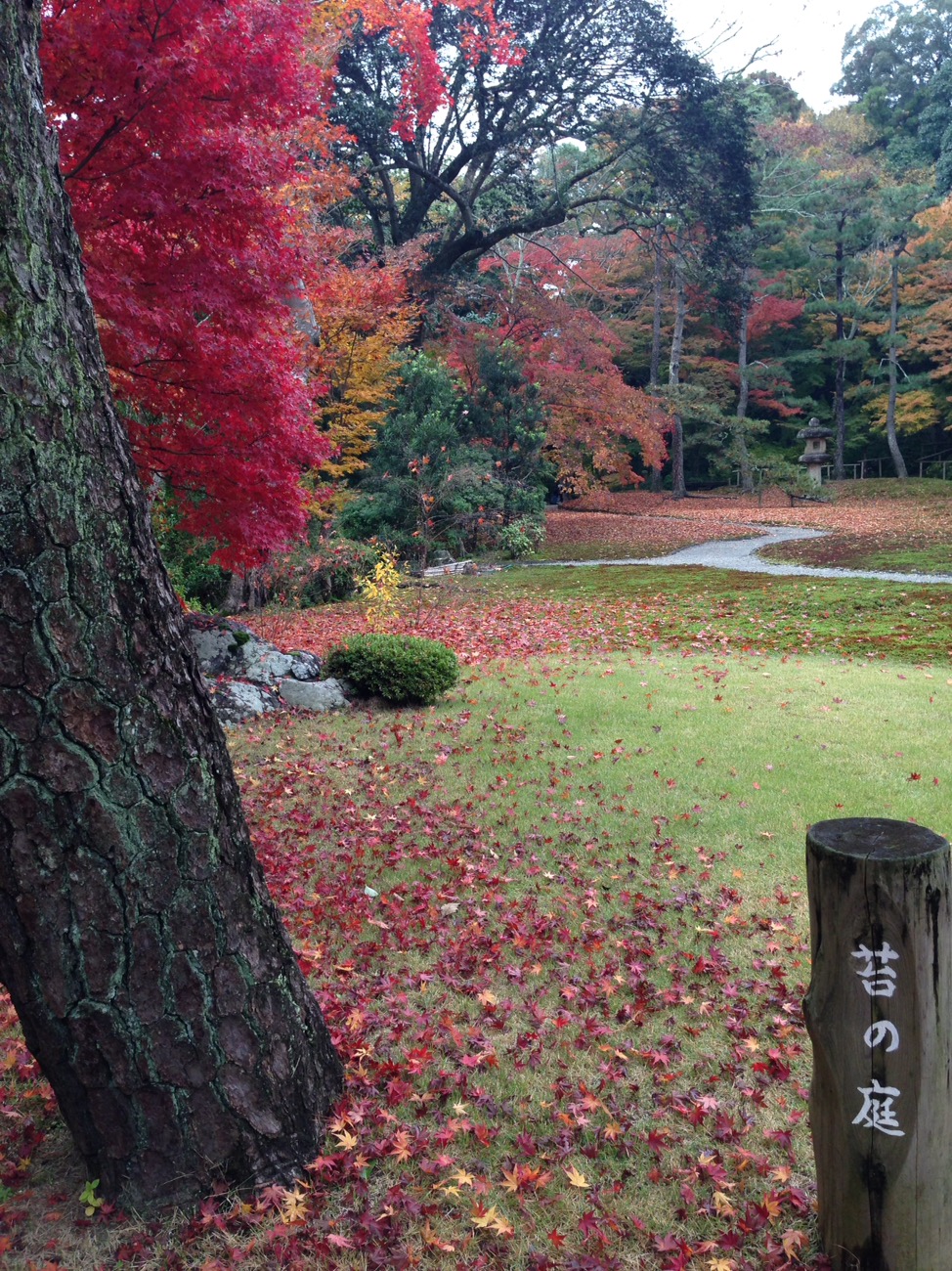 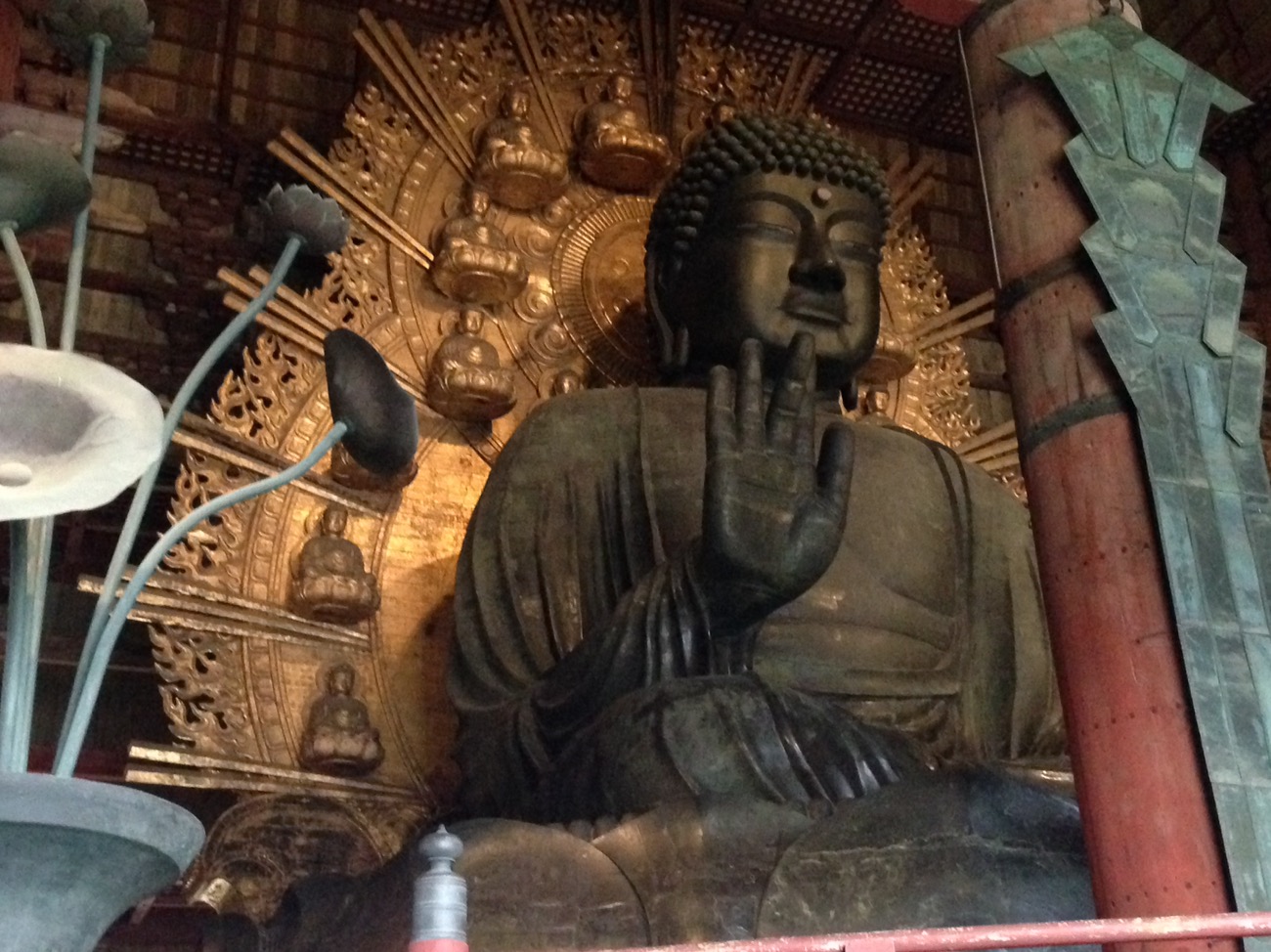 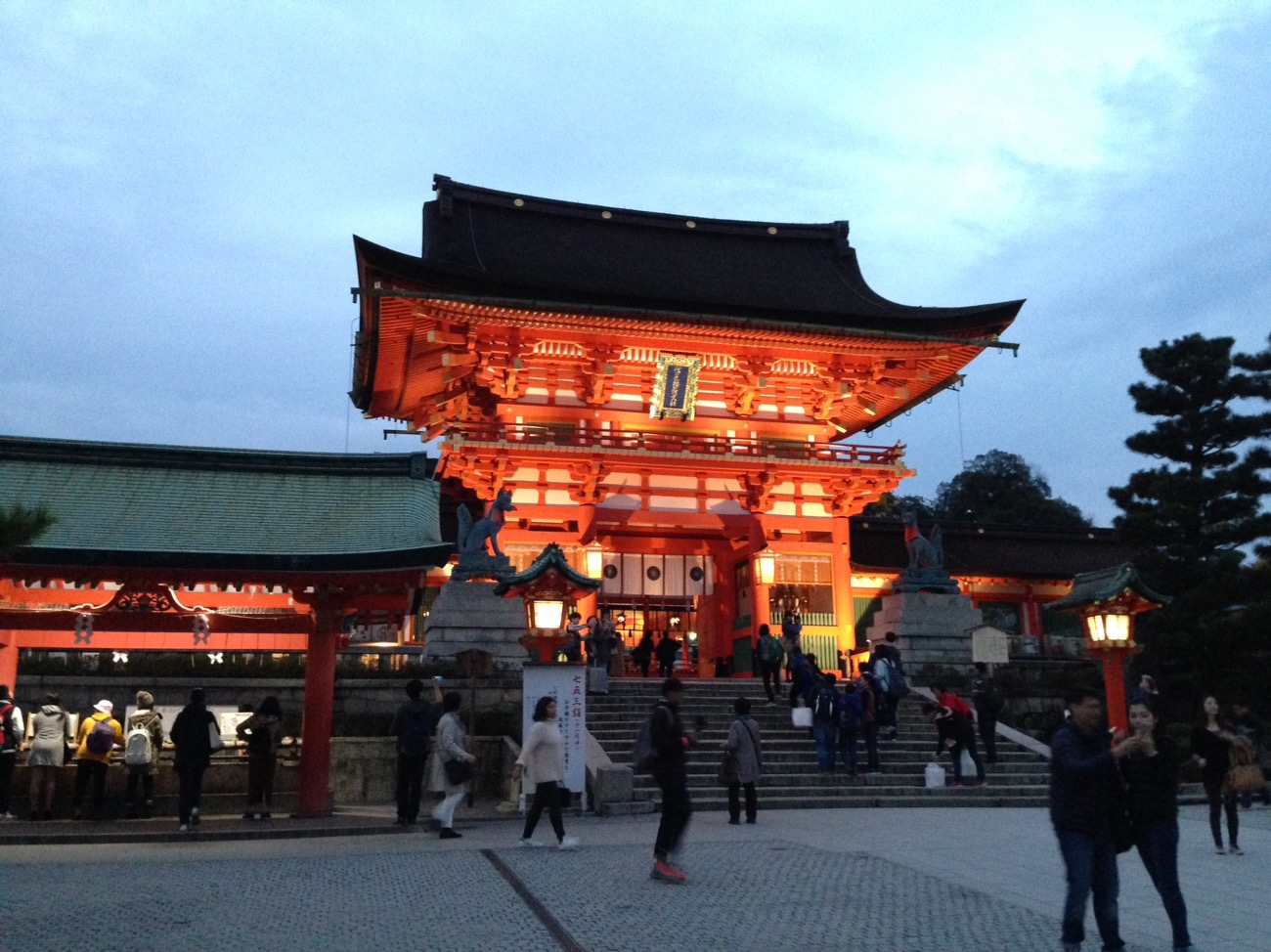 We also ate well, taking advantage of our last few days in Japan to have sushi, eel, karaage, tonkatsu, takoyaki, ramen, yakitori, and tempura. On Monday we took the train to Nara, another ancient capital, and enjoyed walking to more temples and Japanese gardens, as well as the big Buddha (in the largest wooden structure in the world, but rebuilt in 1709 to only 2/3 its original size!). For our last meal in Japan, we delighted in fusion pastas with toppings like eel and bonito flakes, followed by Apple caramel pancakes. Plus we picked up liver skewers and Choco cro for the plane. Yum. 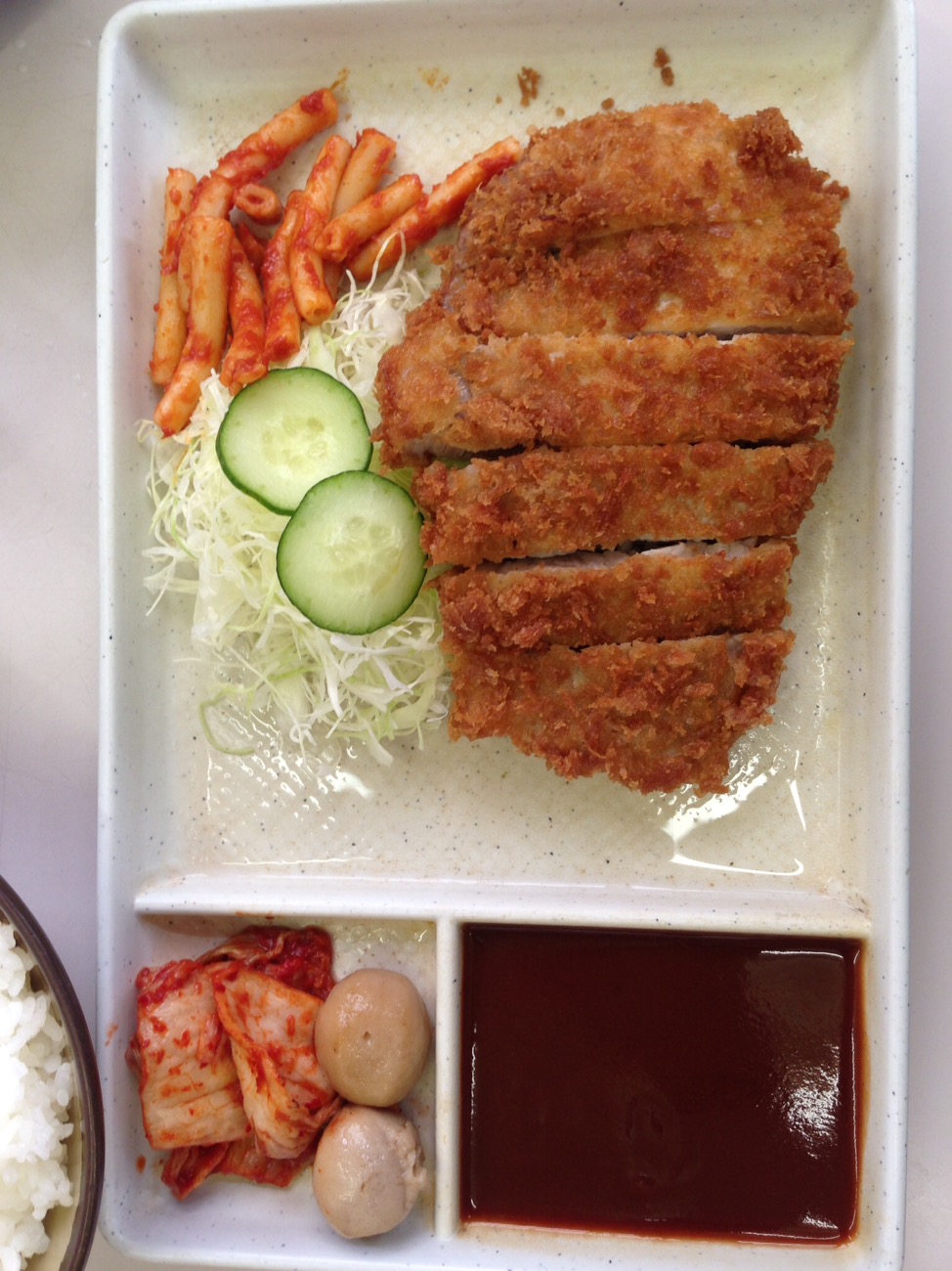 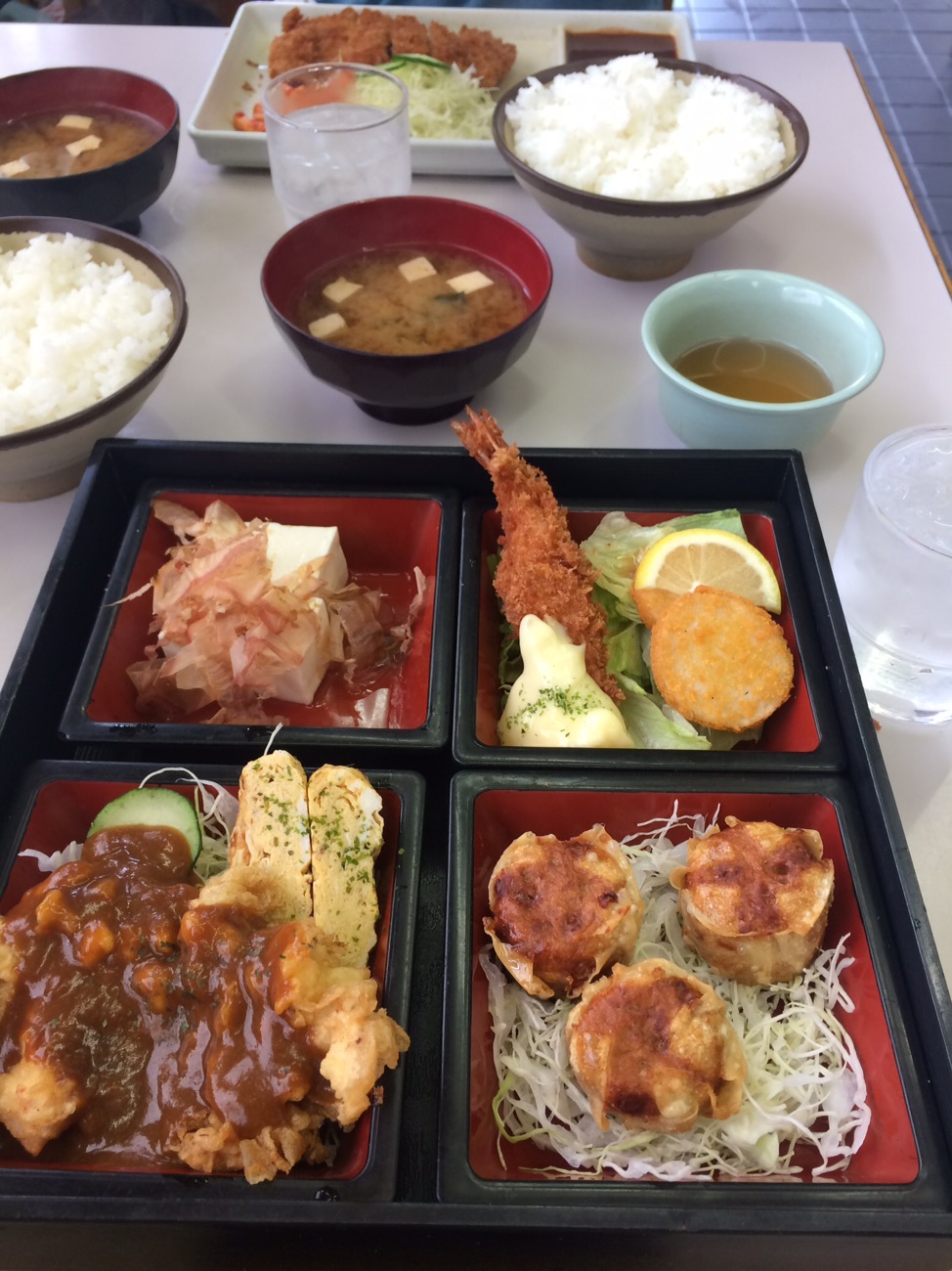 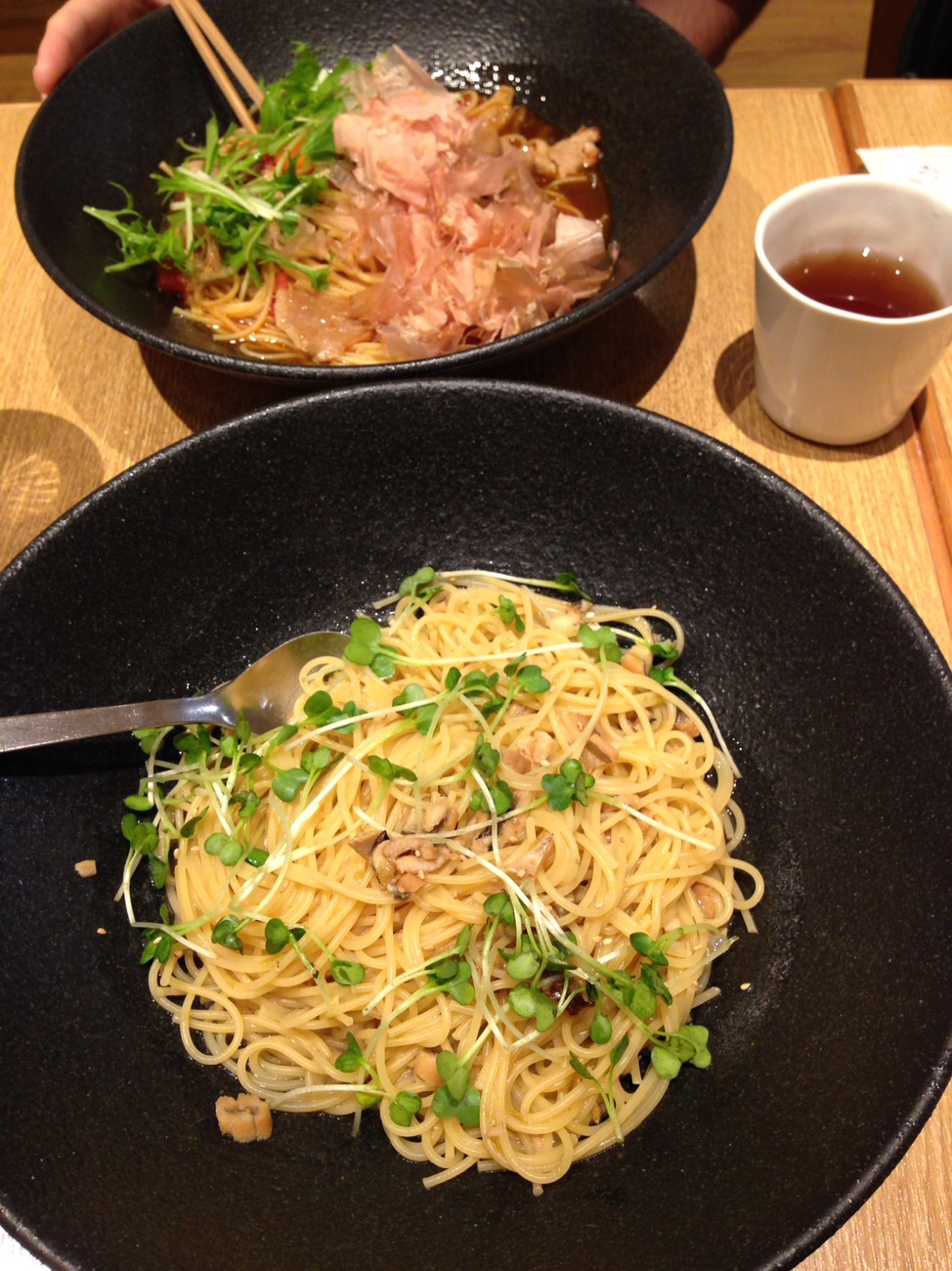 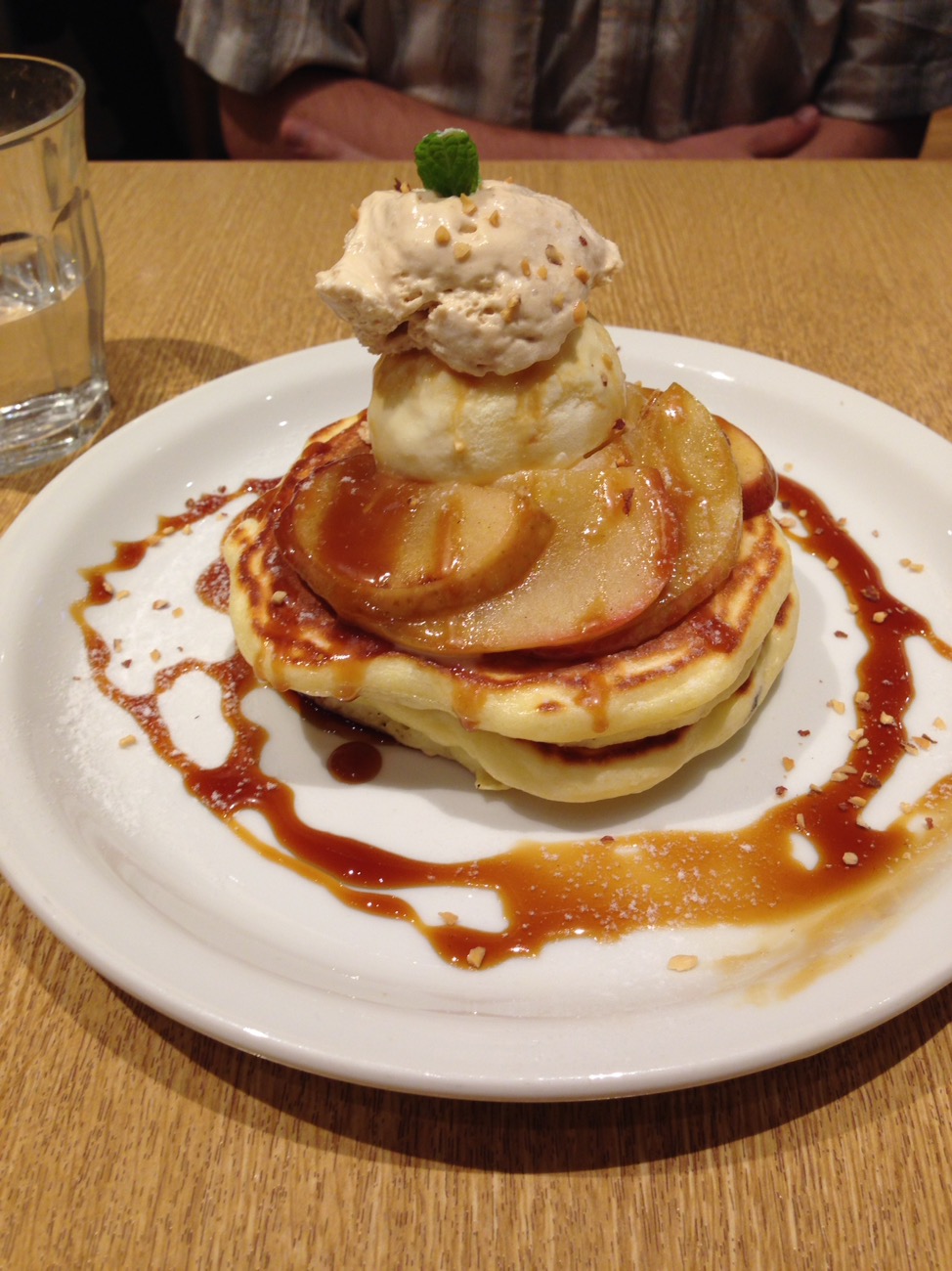 And then it was over – we boarded an overnight bus from Kyoto to Narita (a great deal, saving us a night of hotel and giving us more time in Kyoto) and flew out of Japan for the last time. We will miss its cleanliness, fabulous (and surprisingly affordable) food, and orderly roads – especially now that we are doing 5 days of R&R in chaotic Thailand. Affordable delicious food may be the only thing these countries have in common – we quickly packed away our jackets, pants, and sneakers and are living mostly in swimsuits! Michael is enjoying the slower pace of just relaxing on the beach, while I catch up on things like work and the blog and start to plan for Australia, where I speak at the YOW conference for the next two weeks. 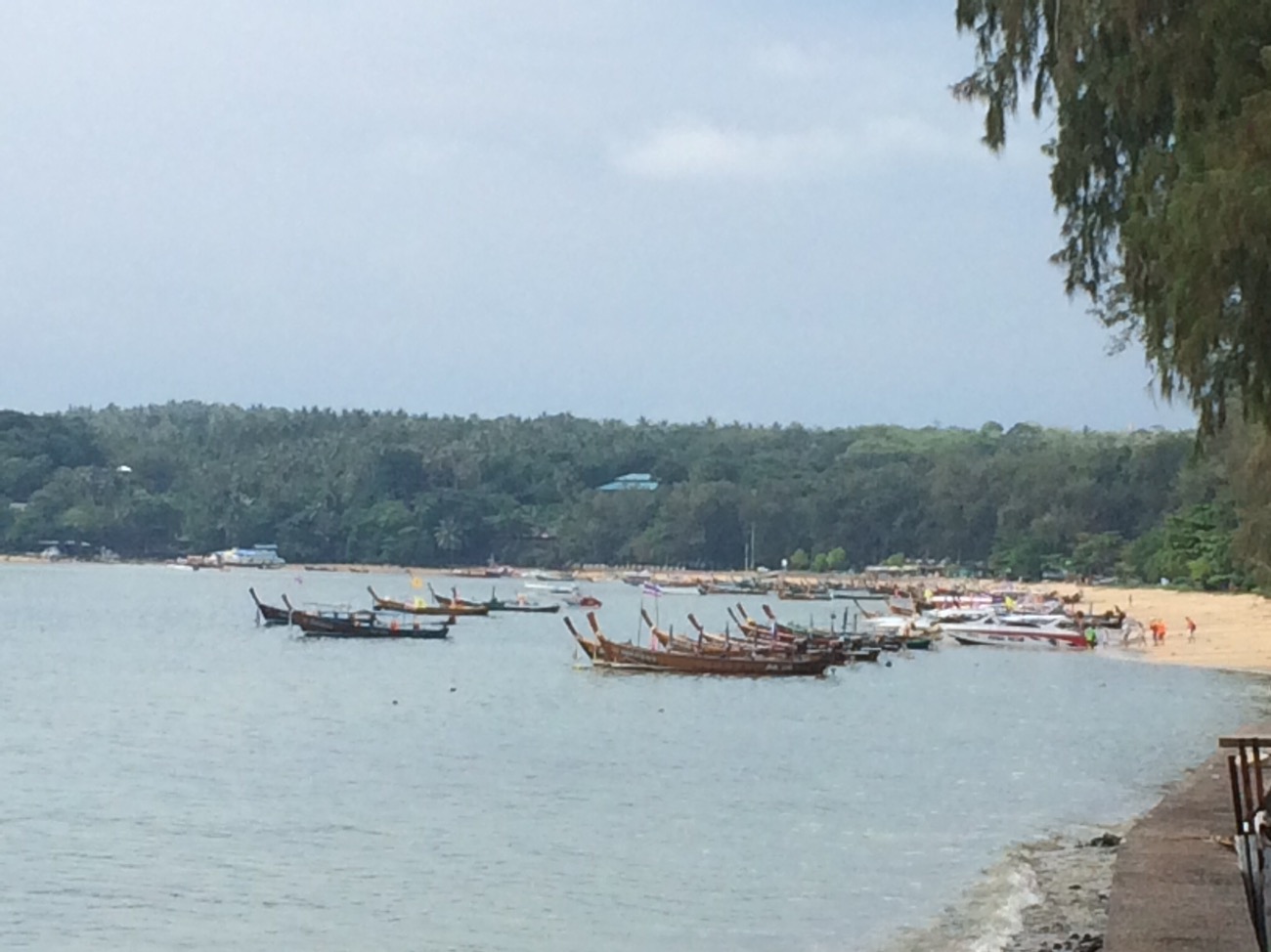 If you’re reading this, we would love to hear from you! Unless you’re one of those spammers who has discovered our blog; in that case, go away.

Happy Thanksgiving to all. We are thankful to have you in our lives and grateful for the opportunity to travel and discover the world.

1 thought on “Wrapping up in Japan ”